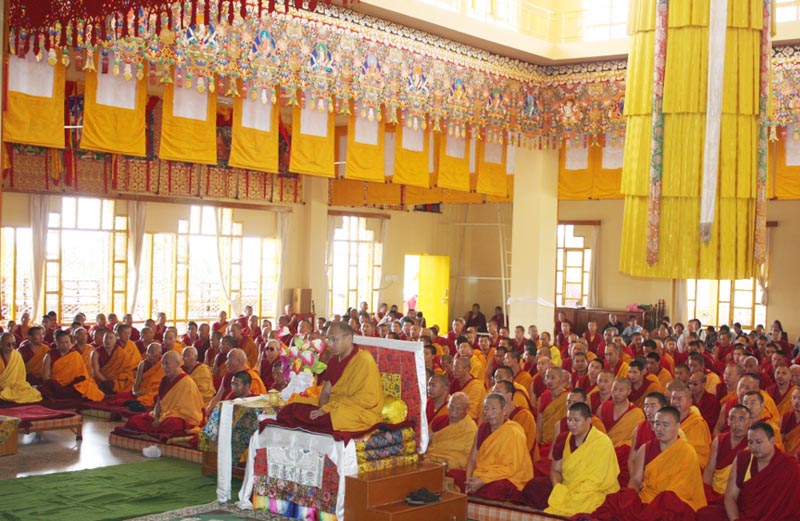 Dharamshala: His Eminence the 17th Gyalwa Karmapa Ogyen Trinley Dorjee led a prayer ceremony this morning for the Kyigudo (Chinese: Yushu) county of eastern Tibet quake victims at his residential Gyuto monastery in Dharamshala, northern India. So far, there have been 2,046 reported deaths, most of them ethnic Tibetans.

The ceremony was attended by all abbots, ex-abbots, Geshes (holders of doctorate degrees in Buddhist studies), and monks living in Gyuto monastery. Religious rituals dedicated to the deceased were conducted today by all Karma Kagyul monasteries in India, Nepal, and Bhutan.

In the keynote address, the Karmapa, expressed his sorrow for the catastrophic loss of human life and severe destruction in the earthquake. To comfort and inspire the living victims, he said, "This (quake) is a tragic happening in our Tibetan history. It is great to see Tibetans have inherent strength to overcome the traumatic and painful events due to their understanding of the nature of compassion, interdependence and law of Karma."

His Eminence the Karmapa also expressed his appreciation for relief aid from neighboring Tibetan regions and praised the rescuing activities by Tibetan monks.

The quake-hit areas Tso-Ngon region (Chinese: Qinghai province) have historic and spiritual links with His Holiness the Dalai Lama and the Karmapa Lama, who both hail from this region.

Last week, the 26 year-old head of the Karmma Kagyu sect instructed his Karmapa Foundation in America to donate $200,000 for immediate aid for the victims of this disaster and to help with the task of rebuilding. Today, the Gyuto monastery administration and its monks donated $3,505 to the "4-14 Yushu Earthquake Charity Committee," formed by Kyigudo youths who now reside in Dharamsala.

Conditions in Kyigudo are worsening, with plummeting temperatures hitting the area early this morning, and Tibetans becoming agitated by the presence of large numbers of Chinese military, who are seeking to take control of rescue and relief activities from monks in affected areas.