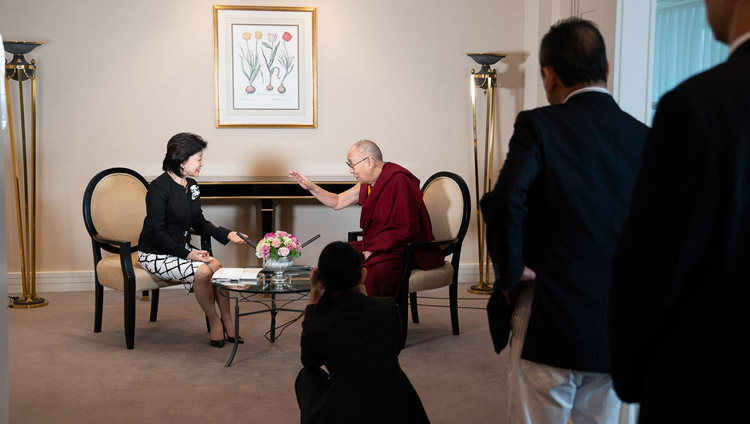 Ms Yoshiko Sakurai, president of the Japan Institute of National Fundamentals, interviewing His Holiness the Dalai Lama in Yokohama, Japan on November 13, 2018. Photo by Tenzin Choejor

Yokohama, Japan – His Holiness the Dalai Lama Monday said that his cherished goals of a world not only free of nuclear weapons, but also demilitarized in general, will only come about when more people have achieved a sense of inner disarmament in their own hearts and minds.

He arrived in Yokohama, Japan from India on November 12, 2018. This is the Tibetan spiritual leader's 25th visit to the Country.

“First I consider myself just one among 7 billion human beings. While we pray for the welfare of all sentient beings, there’s nothing we can do but pray for those in other galaxies. On this planet there are countless animals, birds, fish and insects, but they have no language so we can’t really communicate with them,"  His Holiness said, responding to Rina Yamasawa, a anchorwoman of NHK questioning about the situation in Tibet.

"On a practical level, it’s our fellow human beings who we can do something for. In a materialistic world where many don’t know the value of peace of mind, I try to help them become happier by showing them how to find inner peace," the Noble Peace Laureate said.

Referring to education in the wider world, His Holiness noted that it tends to have materialistic goals, whereas it would be better if it addressed the needs of both the heart and the brain. Specifically he recommended teaching people how to tackle their destructive emotions.

Asked how Japanese and Tibetans can contribute to the welfare of humanity His Holiness expressed his admiration for the Shinto Tradition due to its appreciation of the natural environment. He commended the possibility of combining technological development with a deep understanding of the workings of the mind to enable more people to find inner peace.

The spiritual leader of Tibet also expressed the hope that Japan, as the one country that has been subject to nuclear attack, will not let up on its leadership of the movement to eliminate nuclear weapons.

His Holiness also reiterated that his cherished goals of a world not only free of nuclear weapons, but also demilitarized in general, will only come about when more people have achieved a sense of inner disarmament in their own hearts and minds. This, he suggested, is something to which Japanese brothers and sisters can contribute.