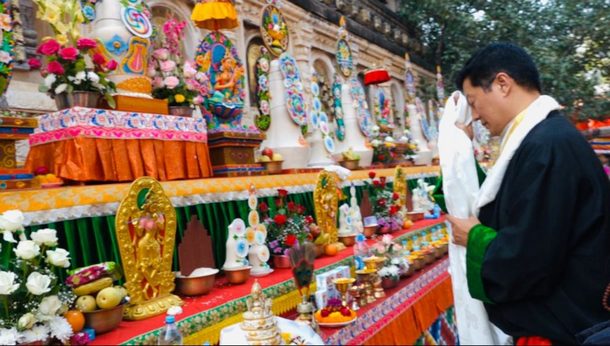 Bodh Gaya, India – President of the Central Tibetan Administration previously known as the Gadan Phodrang, the Government of Tibet, paid visits to the spiritual heads at ongoing Nyingma Monlam and Kagyu Monlam. President Dr Lobsang Sangay who arrived in Bodh Gaya on an official tour was warmly welcomed by thousands of fellow Tibetans, including monks, nuns and lays.

The Tibetan President accompanied by the Chief Resilience Officer Kaydor Aukatsang as they paid visits to the senior monks and spiritual heads at ongoing Nyingma Monlam and Kagyu Monlam in Bodhgaya known as the holiest site for Buddhists.

The annual Nyingma Monlam Chenmo also called the World Peace Ceremony is a sacred festival held yearly from the 1st to the 10th day of the 12th month of the Tibetan Calendar.

This year marks the 31st Nyingma Monlam Chenmo, attended by over ten thousand faithful devotees from all over the world including monks, nuns, and yogis from about 242 monasteries.

The Kagyu Monlam is also a major international prayer festival held annually in Bodhgaya, India, one of the most sacred sites for Buddhists worldwide. Thousands of people gather together in order to listen to Buddhist teachings and to pray for peace and harmony on earth and the well-being and happiness of all the world. This year marks the 37th Kagyu Monlam Festival.