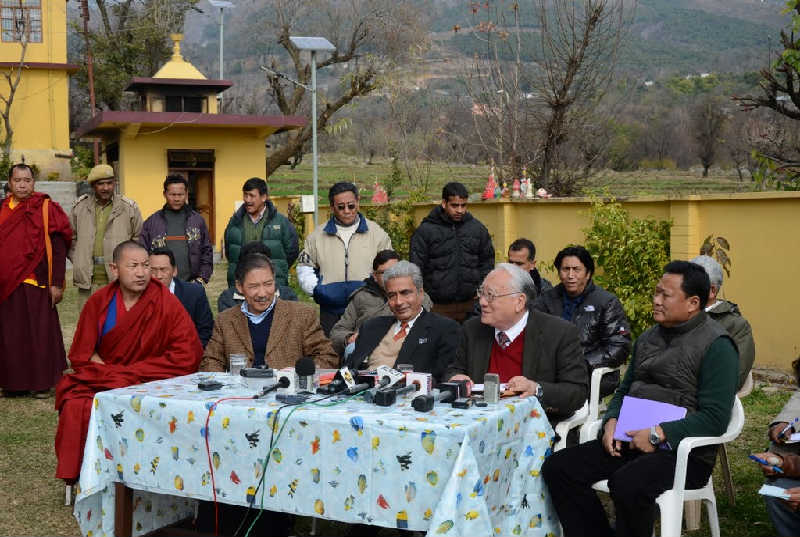 London: The Indian high court lawyer and spokesperson of Tibetan spiritual leader His Holiness 17th Karmapa Rinpoche, Naresh Mathur told Tibetans and Indian journalists that, "every single rupee is accounted for" in an attempt to quell the rumors following the seizure of money at His Holiness' residence at Gyudto monastery.

At the press conference at Gyudto Tantric University, Dharamshala on January 30th, Naresh Mathur answered direct questions from the collected media concerning the confiscation of foreign currencies worth Rs 6 crore from the offices of a Trust backed by the Karmapa and within his monastery. Naresh stated that the money was, "to establish an abode for the Karmapa, so that he could carrying on his functioning. Out here he is a guest, now you can see that us being here, this little conference, is disturbing the monks. These monks are very serious tantric practitioners, so it is in his mind to find his own little place where he can do his own thing. So, the monastery was negotiating for land, when the deal was made it was valued at 2.5 crore."

The Karmapa's spokesman continued by explaining that the money had originated from the Kagyu Monlam event held in December where the money was donated by many people from numerous countries. He added that there was tangible evidence for these donations "receipts were issued by the office of administration, which is the Labrang [Karmapa Institue]".

"The Labrang collected this money and when the money was demanded by the seller [of the land], then since this cash was not available at the Trust, but he said ‘I want it only in cash, I will not take a cheque', so then the Labrang made this payment of one crore, to the seller's representatives in Delhi, who've been arrested, by way of cash. Under section 10, I can do this. I did it. You see, now it is the lookout of the seller as to how he explains this to the tax authorities, but I was within my rights and I have up until now paid 75 lakhs out of 2.5 crores by cheque, and I can demonstrate that the funds are available to the Trust, and I have paid the office of the administration of the Karmapa which is the Labrang has paid one crore, in cash, and we have the receipt for that," he added.

Addressing the large amount of foreign currencies found in the police raid, Naresh admitted that there were flaws in how the monastery and the trust deals with donations, "we could just put a board there: ‘don't offer currency', but now we do not know what we receive, only when we segregate do we find out it's foreign currency. So, you know, these things they generally result in fines". He added that unlike the rupees donated, foreign currency couldn't be paid into the Labrang Trust bank account, resulting in the amounting of the foreign money found during the raid. However, he confessed that the Labrang Trust are likely to face reprimands from the Indian police for the failures in accounting, "think we may face prosecution, from the income tax and the enforcement directorate."