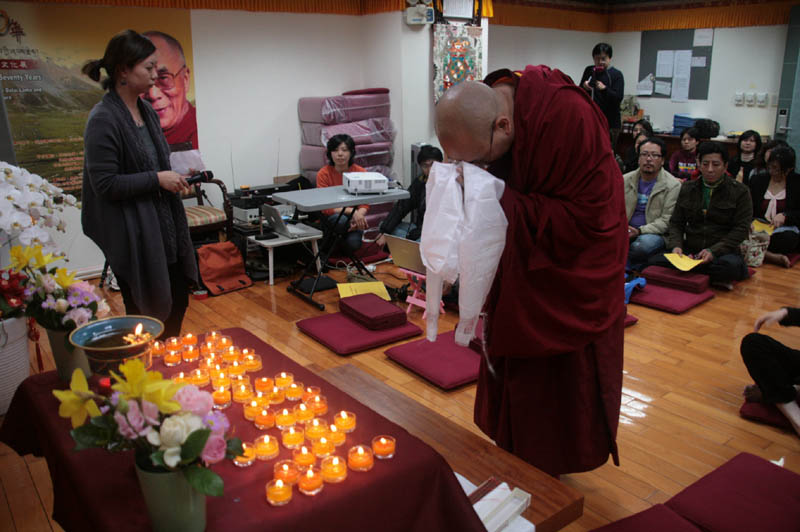 Taipei: Tibetans and Taiwanese supporters gathered in the prayer hall of the Tibet office in Taipei, the capital of Taiwan this evening, February 19, Saturday to combine their voices in prayer following the tragic death of Tibetan activist and freedom fighter Jigme Norbu on 14th February in Florida. The prayer was led by Jampal Chozin the Buddhist teacher of Tibet Office in Taipei.

The ceremony was held by Taiwan based NGOs including Taiwan Walk for Tibet, Taiwan Student for Free Tibe, Regional Tibetan Youth Congress, Regional Women's Association and Taiwan Friends of Tibet, and attracted Taiwanese supporters as well as Tibetans.

Throughout the prayer ceremony for who was struck and killed during a walk to draw attention for the campaign for freedom in Chinese-controlled Tibet, portraits of Jigmey Norbu, banners and posters with late Jigmey Norbu's messages and slogans for Tibet cause; such as "No matter how hard during the walk, even windy or raining - when it reminds me Tibetans in side Tibet...I never give up", were distributed by volunteers to the chanting crowd, while the traditional white scarves were laid in the hall over the portrait of the late Jigmey.

Over 60 Tibetans and Taiwanese supporters held a traditional prayer for His Holiness the Dalai Lama's nephew, they have also remembered his message for world peace, Tibet and Tibetan people and many of banners and posters were displayed during the ceremony, said Keary Huang, the editor of the Chinese version of The Tibet Post International.

The Tibetan Mongolian Buddhist Cultural Center in Bloomington, US says it's holding 49 days of prayer in memory of Jigme Norbu, the public is invited to join monks at 3 p.m. daily at the Buddhist temple. It says another communal prayer is scheduled this Saturday at 4 p.m.