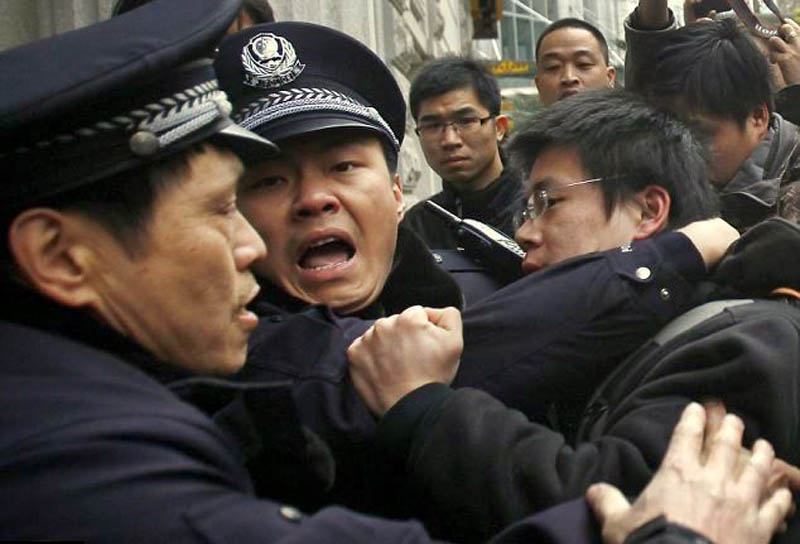 Dharamshala: The recent pro-democracy demonstrations that have swept the Arab world have finally landed in China, after activists used online sites to organise a nation-wide protest in 13 major cities, including Shanghai and Beijing.

The 'Jasmine Revolution', inspired by recent political unrest in the Middle-East and North Africa, was met with a stronger than usual police force in the two major cities, with several demonstrators being detained by authorities. Media were however able to capture interview footage and photograph the attempted uprising before protesters were dispersed by authorities, with footage now viewable on Youtube.

According to Hong-Kong based group Information Centre for Human Rights and Democracy, over 100 activists have been detained by police, confined to their homes or claimed to be missing. Searches for the word 'jasmine' have been blocked and several micro-blogging sites have been warning users against 'political, sensitive... or other inappropriate content'.

The call to protest was first posted on US-based, Chinese-language website Boxun.com by an unknown source, and participants were urged to voice their demands by shouting 'We want food, we want work, we want housing, we want fairness'. The slogan highlights common grievances among the Chinese people, who are dealing with high inflation and rising food costs, as well as increasing unemployment and forced evictions by the government.

All land in China is 'State owned', meaning that at any time the Communist authorities have the right to evict residents and turn their land over to developers, often for inadequate compensation, a practice that has sparked many small protests nation-wide that have been quickly repressed.

President Hu Jintao yesterday gave a speech to top leaders, asking them to 'solve prominent problems which might harm the harmony and stability of the society', and advising on the need to better manage the internet 'to guide public opinion'. On Chinese blogs and chat sites, the Chinese word for 'harmonious' is often substituted for the word for 'river crab', which has the same pronunciation, by those wishing to mock the central government's claim to a 'harmonious society' which is largely seen to be a cover meaning 'controlled society'.

The Chinese government has clearly been unnerved by the uprisings in Egypt, Tunisia, Bahrain, Yemen, Algeria and Libya, blacking out much of the press attention and focussing instead, by use of the State-run Xinhua news agency, on the instability caused by the demonstrations. The attempts by authorities to discredit these uprisings have highlighted the instability of the Chinese regime itself, which is struggling to control its large population by shielding it from the increasingly encroaching outside world.

Charges such as 'inciting subversion' have been a common way for authorities to arrest just about anyone for committing very ambiguous 'crimes', and anyone who speaks out against the Chinese Communist Party (CCP) faces the risk of imprisonment and torture. It has become common knowledge that people who disagree with government policy will soon 'disappear'.

Even after dissenters are released from prison, they are often placed under illegal house arrest and prevented from having any contact with the outside world. Earlier this month, video footage emerged showing blind lawyer Chen Guangcheng and his wife under military guard in their own home following his release from prison, after four years behind bars for uncovering government-forced abortions in his local Shandong province. Following the release of the footage to overseas media, Chen and his wife were 'beaten senseless' by authorities.

China has become notorious for its internet and media censorship and use of brutal force to silence dissent among its people, and the question that has been hanging in the air for some time now is not one of 'if', but rather of 'when', with many people wondering just how long it will be before the autocratic Chinese regime is overthrown by the Chinese people.