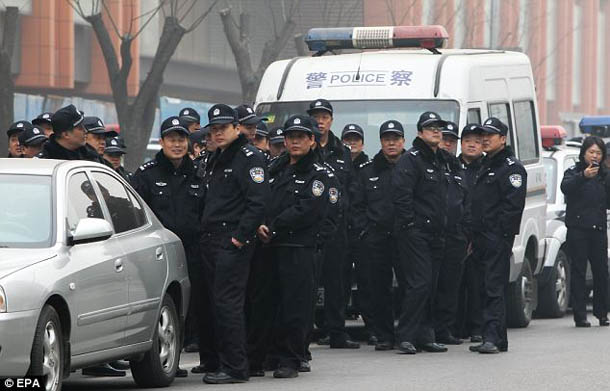 Dharamshala: Zhou Yongkang, China's official in charge of the state security apparatus, spoke at a seminar at the weekend urging senior officials to improve 'social management' and to 'detect conflicts and problems early on', says state media outlet Xinhua.

In the hours leading up to Sunday's failed 'Jasmine Uprising', police in Shanghai detained several known activists and lawyers to rule out the possibility of them participating in the protest, which failed to draw large crowds due to government censorship of the internet and a large police presence in the streets.

Mr Zhou is one part of the nine-man politburo Standing Committee and is responsible for maintaining law and order in the country. He recently suggested that the government create a centralised data-base of Chinese citizens, and use it to collect and record information, an idea with which scary comparisons can be drawn to the citizen surveillance policies of Nazi Germany.

China's autocratic ruling party has been worried by recent protests in the Middle-East and North Africa, fearing a similar eruption could occur in China and threaten Communist rule if not supressed quickly and forcefully. The country's uneven economic development has been one of the factors contributing to discontent, with rising food prices and a 4.9% inflation rate coupled with stagnant wages and poverty among rural populations causing long-term problems.

According to the Chinese government there have been a staggering 90 000 'mass incidents' - of public unrest, in other words - every year since 2007. Official figures published last year show that the government has spent almost as much on maintaining internal order as on defence.