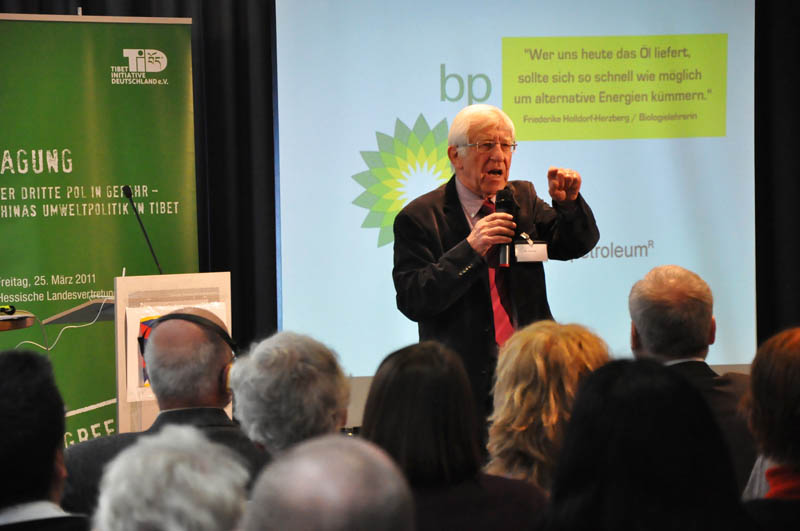 Berlin: - On March 25th more than 100 people accepted the invitation of Tibet Initiative Deutschland e.V. (TID) and came to the Hessische Landesvertretung (Permanent Representation of the Federal State of Hessen) in Berlin to learn more about the ongoing environmental destruction inside Tibet. The reckless extraction of natural resources, China's water policies and the situation of Tibetan nomads are only a few of the many topics that environmental experts like Tenzin Norbu, Claude Arpi and Gabriel Lafitte included in their presentations.

The famous German author and journalist Franz Alt, patron of the conference, and Kelsang Gyaltsen, Special Envoy of H.H. the Dalai Lama, also inspired the audience with their lectures. While Alt in the beginning especially concentrated on the global environmental crisis, Kelsang Gyaltsen turned to the political dimensions of environmental policies in Tibet and also talked about the dialogue with the Chinese government.

"Without humans the world would be better off", Franz Alt in his introduction quoted H.H. the Dalai Lama as saying and made clear what consequences the world's rampant waste of energy will have in the future. He said in one day the world consumed the amount of energy that it took one million years to accumulate. At the same time he also pointed to possible solutions through new technologies. But those technologies also needed to be applied and not only put into a museum, Alt said, referring to Volkswagen's 1-litre-car that never made it onto the market. "When the world starts using energy in a smarter way, there will be one reason less for China to occupy Tibet", Alt said in his closing remarks and hinted to the rampant exploitation of natural resources on the Tibetan plateau.

Subsequently the Australian scientist Gabriel Lafitte talked about the situation of Tibetan nomads, who from their position as nature's guardians instead increasingly turned out to be on the wrong side of history. As is widely known Chinese propaganda tried to characterize the forced relocation of the nomads as progress. Although the true reason for the relocation was, to set suitable conditions for Chinese settlers, who thrust themselves deeper and deeper into Tibet. The Chinese government was expecting the rise in global temperature and speculating that the barren areas currently inhabited by the Tibetan nomads in the future could be at the disposal of Chinese agricultural production.

After a lunch break the French expert on Tibet, Claude Arpi, in his talk concentrated on "China's water policies in Tibet". He said China saw Tibet as a water reserve for its own country, which became obvious taking into account the enormous dams China was building all over Tibet. Chinese officials not only accepted that countless people lost their home, but were also provoking social conflicts in other countries. Because most of the neighboring countries' rivers originated from Tibet, China's policies were endangering the water supply of hundreds of millions of people. Mr Arpi also made the audience aware of the possible geopolitical implications and the imminent threat of armed conflict that could arise due to water shortages in the region.

Tenzin Norbu, Director of the Environment and Development Desk at the Tibetan Government in Exile, also put his emphasis on the exploitation of resources in Tibet. He joined the conference live via Skype video-call. Besides the logging of Tibet's forests he also expounded on Tibet's mineral wealth. Gold, copper, chrome, lithium, salt and gas were excessively being extracted - what is left is toxic waste that endangeres the lives of humans and animals. Furthermore he emphasized that every Tibetan, who advocated for the protection of the Tibetan environment, was risking being labeled a separatist and/or being arrested.

The Special Representative of H.H. the Dalai Lama, Kelsang Gyaltsen, identified the environmental issue as symptomatic for the disenfranchisement of the Tibetan people. These kinds of problems could only be solved if there was a political solution for Tibet. Therefore it was important to continuously put pressure on decision makers and the general public. In this context he explicitly praised the work of Tibet Initiative Deutschland which as the oldest Tibet Support Group in Germany for decades had been advocating for the rights of the Tibetan people. With their campaign "GreenTibet.FreeTibet" the Tibet Initiative Deutschland was taking up an issue that was of great importance to H.H. the Dalai Lama and the Government in Exile.