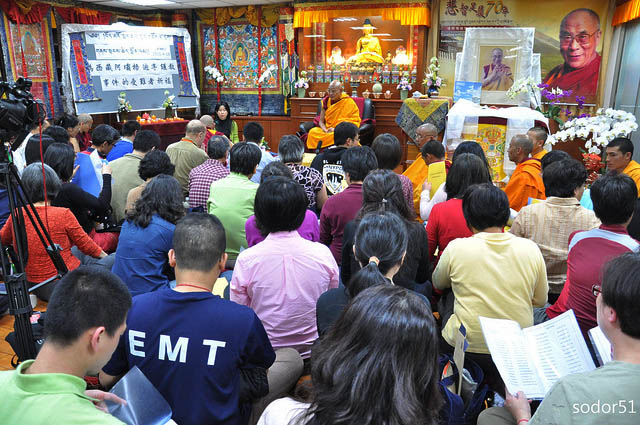 Prayers were also offered in memory of the tragic death of Phuntsok, a 21-year-old monk of Kirti monastery, who self-immolates on 16 March this year to mark the 3rd anniversary of the Tibetan people's peaceful protests which shook Tibet in 2008. Instead of putting out the flames, the police beat the young monk which was one of the causes of his tragic death. This act created huge resentment among the monks, which resulted in this massive blockade of Kirti Monastery.

Venerable Dubthop Rinpoche from Nepal who is currently on his religious tour in Taiwan was requested to lead the prayer service. Geshe Jampal Choezin, the religious teacher of the foundation, in his brief address expressed hope that the prayers would help alleviate the sufferings of the Tibetan people in Amdo Ngaba.

About 100 students of the foundation and other Taiwanese Buddhist devotees gathered in the prayer hall and offered prayers and lit candle lamp from 6:30 pm to 9 pm.

Meanwhile, the restrictions in Ngaba has been intensified with Tibetan government officials and schoolteachers forced to attend "patriotic re-education" session since 15 April, Kanyag Tsering, a monk at Kirti Monastery in Dharamsala said quoting sources from Ngaba.

A group of government officials from neighbouring Dzoge region, located some 150 kms from Ngaba, arrived at the monastery to conduct the session, which was presided over by the head of the United Front Work Department in Ngaba. The UFWD chief has warned of stern action against the monks of Kirti Monastery who have relayed information to the outside world.

The authorities, with the help of police and military, have imposed strict restrictions on the monastery, not allowing a single monk to go outside after 8 p.m. Those who venture in the courtyard after the prescribed time and encounter guards patrolling the monastery face severe beatings.

Seven monks in a monastic quarter were left without food for three days due to the severity of the blockade imposed on the monastery. After knowing about their dire condition, other monks gathered small amount of food and delivered to them.

There are also reports of police conducting arbitrary raids at monks' residential quarters and the monks' belongings were stolen as a result.

Later on 17 April, around 800 government officials from the neighbouring Dzoge region were brought in at Kirti Monastery to conduct the re-education session. The re-education session carried out on that day was different from the previous ones as individual monks are forced to stand in front of the gathering and answer questions from the authorities. The monks have been warned that the severity of the re-education session would be prolonged if they do not mend their behaviour and thoughts in accordance with the official stand during the course of the session.

Moreover, since 20 March the monastery's clinic has been shut down due to which the monks could not get necessary medical treatment.

The restrictions imposed in and around the monastery still remain intact. The three main approaches to the monastery have been blocked with the completion of a concrete wall construction on the northern side of it.

--Kalsang Lhundup from OoT, Taiwan, contributed to the report