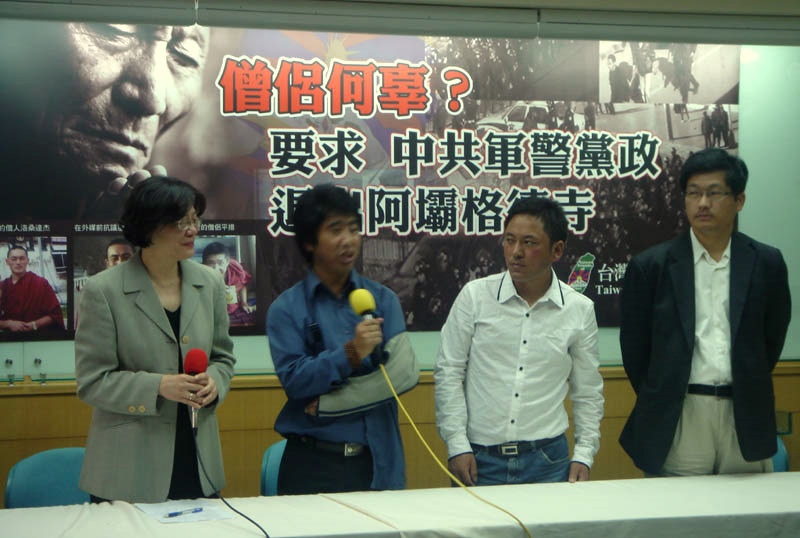 Taipei? - Taiwan Friends of Tibet (TFOT) Tuesday publicly asked the Chinese authorities to stop the blockade of Sichuan Ngaba Kirti monastery with immediate effect, and to stop the killing and arrest of monks and local Tibetan people. TFOT appealed to the people of Taiwan to understand that the nature of the Chinese communist regime's violence against unarmed monks and demanded that Taiwan's government openly express concern about religious persecution. TFOT also named the head of China's Bureau of Religious Affairs, Wang Zuoan, and Sichuan Provincial Party Secretary, Liu Qibao, as persecutors of human rights.

At TFOT's press conference Tuesday, 26 April 2011, the orgnanisation's president, Ms Zhou Meili, stated, "The whole world is concerned about this. Of course Taiwan can not stay out of it. We call on Taiwan government to express its concern publicly."

His Holiness the Dalai Lama has openly urged the Chinese government and monks to avoid more casualties, as Communist Party of China police continue to blockade the monastery. Monastery officials have been forced to take part in 'patriotic education' and the entire monastery's rooms have been blocked up with cement. Pro-Tibetan organizations around the world are appealing for international intervention, in order to avoid even greater disaster.

1.For Taiwan's government to publicly express concern and demand that China stop any further military and police atrocities being committed against the monks.

2.For Buddhists in Taiwan to appeal to the Chinese communists to stop their cruel behavior in Tibet - this being a matter not only of religious freedom, but also physical violence against monks and attempts to destroy Buddhism.

3. For all the people of Taiwan to consider and recognise the brutality of a regime that will harm even monks.

At Tuesday's press conference, Tsewang Dondup also described how, in March 2008, he tried to rescue an injured monk who had been shot and wounded by Chinese officers. The monk was taking part in a demonstration when he was shot in the abdomen and left wrist by two guns. He then hid in a forest, with no hospital treatment, and miraculously survived. Tsewang Dondup complained that, "I did not do anything wrong - not even asking President Hu Jintao to step down. [I] did not participate in demonstrations - just tried to save a monk who had been hit, [but I am] also wanted by the Chinese Communists."