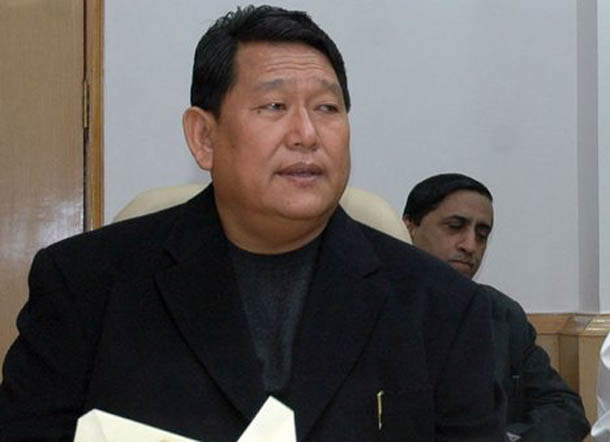 Dharamshala: - The chief minister of India's Arunachal state Dorjee Khandu who also well-known and respected leader was presumed dead on Wednesday when search teams located the wreckage of his helicopter that went missing four days ago, but the other four bodies were mutilated and charred beyond recognition, officials said.

According to Indian news agencies, Indian soldiers trekked to the mountainous site in northeast India to identify bodies after the wreckage was spotted during a massive ground search. Indian officials today indicated the sad news that Arunachal Pradesh Chief Minister Dorjee Khandu and four others may not have survived the crash of the helicopter in which they were travelling on Saturday.

"The crash site has been located and some bodies have been sighted," Home Minister P. Chidambaram said in New Delhi. "It is not good news." Dorjee Khandu, a member of the ruling Congress party, was appointed in 2007 as chief minister of Arunachal Pradesh.

The helicopter, which was carrying Khandu, two pilots and another passenger, lost contact with air traffic control in bad weather on Saturday morning soon after take-off. It was travelling from the Tawang region of Arunachal Pradesh near the Chinese border to the state capital Itanagar. Searches by Indian Air Force helicopters had been hampered by continuing poor weather and special satellite images had also failed to find the wreckage.

Thousands of soldiers, police and paramilitary troopers conducted searches through the difficult terrain under the helicopter's planned route, while neighbouring Bhutan has also sent out patrols. The AS350 B-3 single-engine helicopter disappeared after another crashed in Tawang on April 19, killing 17 people and injuring six.

Both aircraft were operated by Pawan Hans, a service which provides one of the major air links across the isolated northeastern region of India.

Dorjee Khandu was in the Indian Army Intelligence Corps and worked there for more than seven years. He received a gold medal for the meritorious intelligence services rendered during Bangladesh War. Later, he was engaged in social activities for village people of Tawang District and looked after their welfare up till 1980. In 1980, he was selected uncontested as the First ASM and worked in same capacity till 1983. In March 1990, he was elected uncontested to the First Legislative Assembly of the State of Arunachal Pradesh from Thingbu-Mukto constituency. In March 1995, he was re-elected to Second Legislative Assembly of the State of Arunachal Pradesh from the same constituency. He became the Minister of State for Cooperation from 21 March 1995.