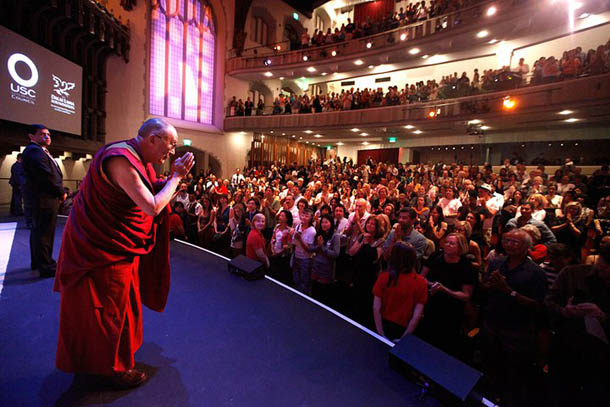 Dharamshala: - On his current tour of the US, the Tibetan spiritual leader His Holiness the Dalai Lama yesterday, May 3rd, gave a talk on "Secular Ethics, Human Values and Society" at the University of Southern California (USC). Throughout the talk he wore the USC's baseball cap which, in a case of serendipity, matched the colours of his traditional monk's robes, as he touched on topics as diverse as the consciousness of animals, the strengths of India's multicultural society and the nature of happiness.

His Holiness recently announced his exit from politics, at least to the point that he is stepping down as the political leader of the Tibetan people. On this tour of the US it seems, therefore, that he has chosen to focus mostly on spiritual matters. He did, however, comment on the assassination of Osama Bin Laden in response to a question from the audience.

According to the L.A. Times, His Holiness, the Dalai Lama, said that, as a human being, Bin Laden may have deserved compassion and even forgiveness. But, he said, "Forgiveness doesn't mean forget what happened. (...) If something is serious and it is necessary to take counter-measures, you have to take counter-measures." His statement has been the subject of analysis in the American media, some suggesting that the Dalai Lama is calling Bin Laden's death a justified one, while others indicate that he is merely trying to baffle people in a good-humoured attempt to provoke the individual's own critical sense.

And good-humoured he seemed, stating that "Today, I feel terrific" as a comment to his condition of a sore throat which delayed his departure from Japan to the US by 2 days. According to the Pasadena Star News, his happy demeanor was underlined when, answering the question from a student about whether it was best to work for a big corporation and make more money or to follow a passion for working for a non-profit, the Dalai Lama replied "You are your own master. Follow your heart, and if anyone asks about your decision, you can blame me!"

Today, May 4th, His Holiness will be receiving the Shine a Light?award from renowned human rights organisation Amnesty International in Long Beach. Later in the day he will be giving a talk on Compassion and Global Leadership?at the University of California, Irvine, before moving to the next stop in his itinerary, the Tibetan American Foundation of Minnesota.