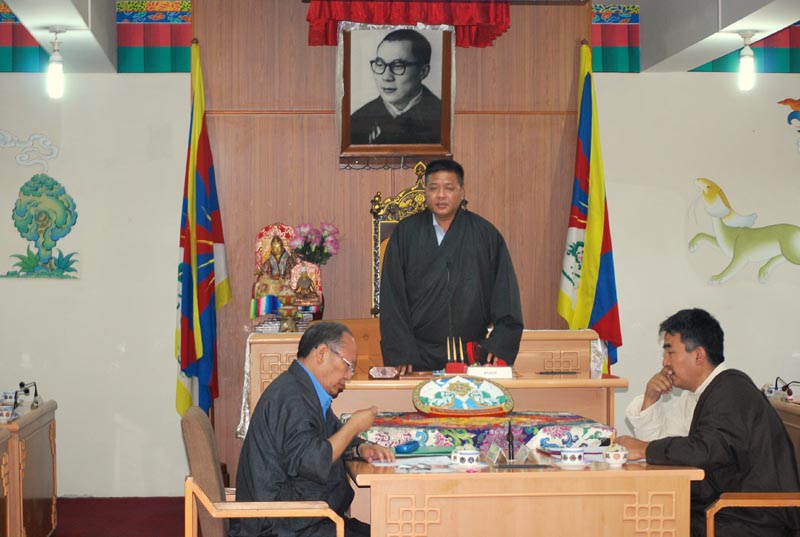 Dharamshala: His Holiness the Dalai Lama today turned down the role of head of state for the Tibetan administration-in- exile. Although Tibetan leaders urged him to remain as ceremonial head of state, His Holiness firmly maintained his decision to step back from the political scene and focus on his role as spiritual leader.


During a meeting yesterday, May 25, the Tibetan Parliament-in-exile on behalf of the 418 delegates from over 20 countries who have attended the 2nd Tibetan national general meeting presented His Holiness with a letter of request that he remain ceremonial head of nation. He declined the request and opted for a wholly people-led democratic government-in-exile, saying he would rather keep to the statement he made in March - referring to his announcement to step down as Tibet's political leader.

The Amendment Drafting Committee of the Tibetan Parliament-in-exile, which was created to make changes to the constitution after His Holiness' decision, has drafted a preamble and a series of amendments to the Tibetan Charter, with the redefinition of His Holiness' role as the central issue.

At the Second Tibetan National General Meeting this week, hundreds of Tibetans gathered from around the world to deliberate on this fundamental challenge for the Tibetan government and for the Tibetan people. After three days of discussions, all proposals were consolidated and presented to His Holiness.

His Holiness' decision was not unexpected, given his consistent stance since March. Even so, the changes have rocked the Tibetan political system, which has a long and colourful history.

For more than half a century His Holiness has been the Tibetan people's political leader. He has served as the head of a government that takes responsibility for more than six million Tibetans, including around 190,000 Tibetans in India and around the world. Given His Holiness' huge popularity with Tibetans at home and in exile, his charismatic position in the international community, and his efforts to create a peaceful dialogue with China, the new Kalon Tripa (prime minister), Lobsang Sangay, faces an enormous challenge in taking on His Holiness'  political role.

The Tibetan Charter's new Article One: Protector and Symbol of the Nation, which was unanimously supported by the Second General Meeting, states that His Holiness the 14th Dalai Lama is Avalokiteshvara ('Lord who looks down') reincarnate, the symbol of unity for Tibetans and Tibetan identity, the supreme spiritual leader of the Tibetan people, the free-spoken leader of Tibetans and a World Peace Laureate.

Article One is divided into three sections, with the following provisions, roughly translated from the Tibetan and including His Holiness' initial responses:

1) The Tibetan government will provide advice and encouragement with respect to the protection and promotion of the physical, spiritual, ethical and cultural well-being of the Tibetan people and remain engaged in efforts to reach a satisfactory solution to the question of Tibet and to accomplish the cherished goals of the Tibetan people. This was supported by His Holiness the Dalai Lama.

2) His Holiness the Dalai Lama will make statements (His Holiness said he would only be in the postion to give advice and opinions and will not be in the position to make any mandates) and give guidance to the parliament and cabinet.  He is requested to give advice and direction at times of importance to the Tibetan Government and Parliament-in-exile, and to the Tibetan people, in both the political and religious spheres.His Holiness agreed to this.

The charters preamble draws upon Tibet's long and rich history, showing how the Dalai Lama's role and Tibet's political history have changed over time, and highlights the following points:

In 900 BC, Tibet was a collection of small kingdoms. By 1300 BC Genghis Khan had occupied both Tibet but also China. In 1260, Drogon Choegyal Phakpa restored the sovereignty of the three provinces of Tibet.

In 1642, the fifth Dalai Lama established the Tibet Ganden Phodrang government, which initiated the system of successive Dalai Lamas holding both political and religious power.

In 1950, a year after China invaded Tibet, His Holiness the Dalai Lama, aged 16, became the political and spiritual leader of Tibet. Two years later, Tibet was forced by Beijing to sign the 17-Point Agreement. Eight years of political tension followed and eventually His Holiness and his government moved from Lhasa to Lhatse city, because the Chinese government did not uphold their side of the agreement.

His Holiness fled to India in 1959, and initiated the Tibetan government-in-exile.