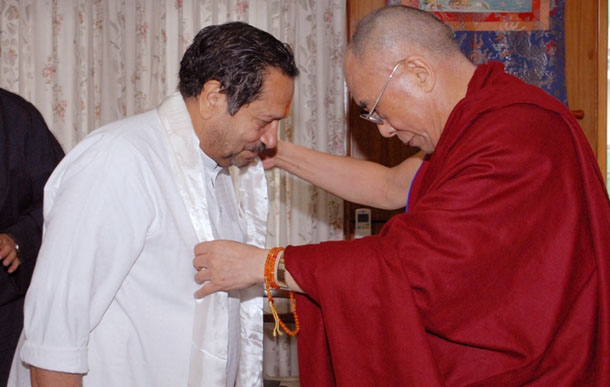 Dharamshala: - The leader of the Rashtriya Swayamsevak Sangh (RSS) on Friday met with Tibetan spiritual leader His Holiness the Dalai Lama and discussed Tibet issues such as the current situation in Tibet.

The source told The Tibet Post International that Mr Indresh Kumar, the leader of RSS has raised some points regarding the current situation of Tibet and the struggle on the issue of Tibet cause. He also has shown his strong and warm support for the struggle of Tibet cause. During the meeting, the current Prime Minister of Exile Tibetan Government, Prof. Samdhong Rinpoche has extended his 'warm welcome to the audiences.

Mr. Indresh has declared that, the 27th May, 2011 is a significant date to highlight as 'Tibet Day'. His Holiness the Dalai Lama gave his blessing to Mr. Indresh, RRS leader who was accompanied by Mr. Rishi Walia, the Executive Member of Himalayan Pariwar and Mr. Chime Youngdung, the President of National Democratic Party of Tibet, it said.

After his audience with the Tibetan spiritual leader, he also met with newly elected Prime Minister of Tibetan government in exile, Dr. Lobsang Sangay and expressed his congratulations on for the election victory and well wishes for the upcoming term in Kalontripa office.