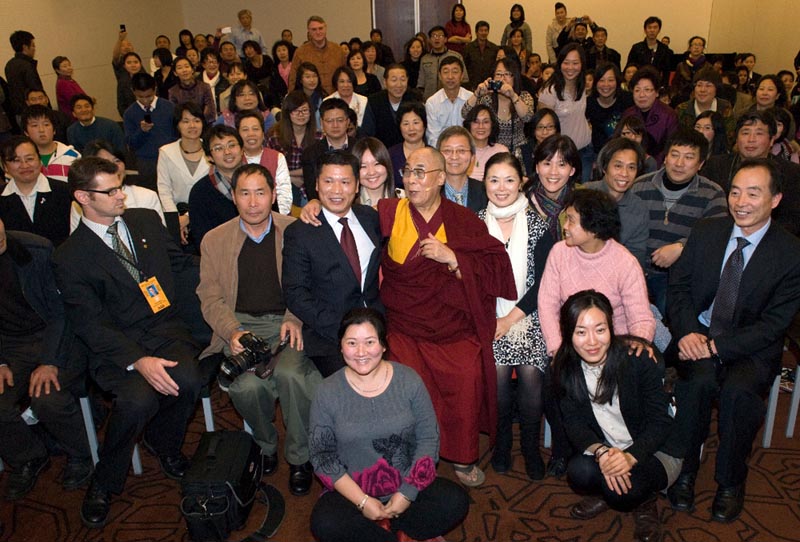 Melbourne: - His Holiness the Dalai Lama has told a gathering of Chinese community in Melbourne Sunday that transparent governance and freedom of press are stepping stones for China to embrace democracy.

His Holiness met with a large group of Chinese youth, Buddhists and democracy activists on his fourth day in Melbourne. Many of them are members of the Chinese-Tibetan Friendship Group in Melbourne, which was established on suggestions from His Holiness the Dalai Lama on a previous visit.

He said the Tibet-China relationship spans over 1000 years. "As far as Buddhism is concerned, it flourished in China long before Tibet. So the Chinese are more senior students of the Buddha," he said.

On the political front, His Holiness reiterated his position on seeking autonomy within China. He said, "We should resolve the issue through friendship and mutual cooperation."

His Holiness told the Chinese gathering that he is proud to show the Chinese government on what he has done in achieving a genuine Tibetan democracy, adding it is now the Chinese Communist Party's turn to retire after being in power for 60 years.

However, he made it clear that it is not his expectation that China would change into a democratic country overnight. He said, "China is a big country and is not used to democracy. It is good to take go on that path gradually. The first step to take could be to be more transparent and more open. It should start with allowing freedom of press and to stop means to spread false information."

His Holiness was touched by the warm reception from the Chinese community. A group of Chinese women recited a prayer song in Tibetan for him. He told them it was the same prayer that he has been reciting every single day since his childhood.

Earlier in the day, His Holiness met with the members of Tibetan, Mongolian and Bhutanese communities. He told the audience that "we should be 21st century Buddhists. By this, I mean we must have full understanding of the Buddha dharma."

He encouraged the Tibetans living in Australia to pay special attention in preserving our culture. He said, "We are in exile not because of a natural disaster or a civil war. We left our country because of a foreign occupation. It is our duty to keep our rich and ancient heritage alive." Refuting any speculation over his devolution of political power, His Holiness told the Tibetans in the audience to "be assured" that he has not given up on Tibet. "I have taken my decision in the long-term interest of the Tibetan people," said His Holiness.

His Holiness then headed off to start his second day of teachings on Bodhisattva's Way of Life. After completing chapter 9 on wisdom, he drew attention to chapters 1 (The Benefits of the Awakening Mind), 4 (Conscientiousness) and 8 (Concentration).

He spoke at length on emptiness, nirvana, the Four Nobel Truths and other central Buddhist concepts. Speaking in both Tibetan and English, His Holiness again showed his remarkable prowess as a Buddhist teacher, communicating these profound concepts not only in a manner accessible to Tibetan and Western minds alike, but highly relevant to the modern world.