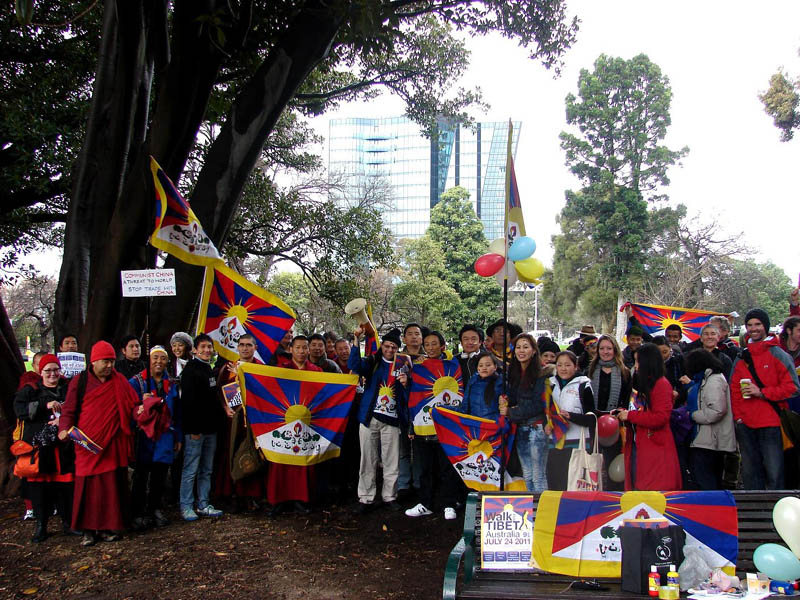 Sydney, AU: - Today (24th July), Tibetans, Tibet supporters and local Vietnamese in Australia hold the "Walk for Tibet" campaign in memory of Jigme Norbu, nephew of His Holiness the Dalai Lama, died in his participating in a "Walk For Tibet" event in USA (1), to raise the awareness for the suffering of Tibetans under Chinese occupation, and against China's latest propaganda drive in Tibet, so called the 60th anniversary the "peaceful liberation" of Tibet (2).

United Nations for a Free Tibet (UNFFT), with the participation of Australia Tibet Council, local Tibet community and many other Tibetan groups, and even Vietnamese Community in Qld., has organized a *Walk for Tibet in Australia* on Sunday in honor of Jigme Norbu. UNFFT Campaigners said, "We* walk for Tibet to raise awareness for the suffering of Tibetans under Chinese occupation. The Tibetans are being murdered, annihilated and their culture and land entirely destroyed. China invaded Tibet now more than 60 years ago. Tibet never had been a part of China, and therefore China is unlawfully in
Tibet."

"Jigme Norbu, who had wanted to take his Ambassadors for Peace to Australia as he had told me, two days before he passed away." said Brigitte Graefin von Bulow of the United Nations for a Free Tibet (UNFFT). "To keep the promise the UNFFT made to partner with Jigme in Australia for his *walk for Tibet*, and decided to walk for Tibet on July 24 (Sunday) in the four cities in Australia, and fulfilling Jigme's wish."

In Australia, Tibetans, Tibet supporters and Vietnamese Campaigners together hold the urgent campaign, which will take place in Brisbane, Melbourne, Sydney, and Adelaide.