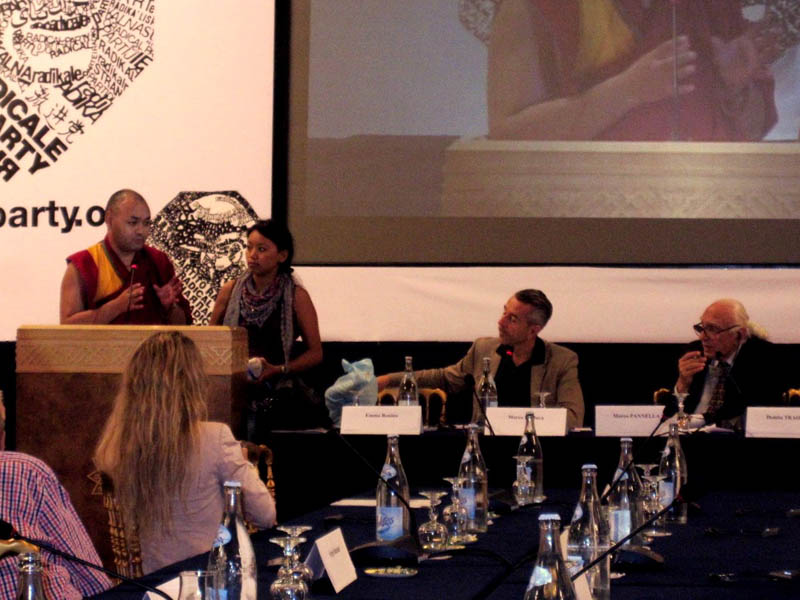 Dharamshala: - The Deputy Speaker of the Tibetan Parliament-in-Exile participated in the meeting of Italy's Nonviolent Radical Party, Transnational and Transparty General Council held in Tunis from 22-24 July. Around 82 delegates took part in the three-day meeting to discuss issues of democracy and non-violence among others.

The meeting was attended by some of the top Italian politicians which include Marco Pannella, member of the European Parliament and President of the Nonviolent Radical Party, Emma Bonino, vice president of the Italian Senate and former Italian Minister of European Affairs and International Trade, Perduca Marco, a member of Transnational Radical Party.

In his statement, Deputy Speaker Ven Khenpo Sonam Tenphel apprised the delegates about the His Holiness the Dalai Lama's decision to devolve his formal authority to the elected Tibetan leadership for the long-term benefit of the Tibetan people.

The deputy speaker informed the participants about the deteriorating situation inside Tibet in terms of the Tibetan people's right to religious belief, use their own language, culture and traditional lifestyles under the repressive and discriminatory policies of the Chinese government. "The policy of Chinese government simply deepened resentment and animosity between the Tibetan and Chinese peoples," the deputy speaker said.

"Lack of respect for the sentiments and aspirations of the people always results in resentments and conflicts between the people and those who govern them. It is crucial for the leaders to be always accountable to the people who have reposed their trust and confidence in them," he said.

"The Chinese government should actually resort to peaceful dialogue with their own people by respecting the basic human rights, principle of democracy and the rule of law. Only then the Chinese authorities will be able to build trust and confidence between the government and the people," he added.

On the Sino-Tibetan dialogue process, the deputy speaker said there has been negative response of the Chinese government towards the efforts made by the Tibetan side in resolving Tibet's problem through the mutually beneficial Middle-Way policy. "His Holiness the Dalai Lama and the Central Tibetan Administration presented written proposals for genuine autonomy for the Tibetan people within the framework of the constitution of the People's Republic of China. The Chinese government, however, has given negative response and imposed further restrictions on Tibetan religious freedom, language and fundamental rights," he said.

He underscored the strategic importance of the Tibetan plateau as the source of many rivers in Asia. "The significance and the sensitivity of the Tibet's environment have been recognised internationally. Asia as a continent and in fact the world at large will enjoy genuine peace and stability only when a lasting solution is reached to resolve the Tibetan political problem," he said.

The deputy speaker further said, "the Tibetan people are firmly resolve to follow the path of peace and non-violence in their struggle for freedom and human dignity."

He expressed hope that the meeting will go a long way in having meaning discussions and also reaching effective and lasting way out for resolving the crucial problems currently faced by humanity.

He also thanked the organising party for their support to the Tibetan cause.