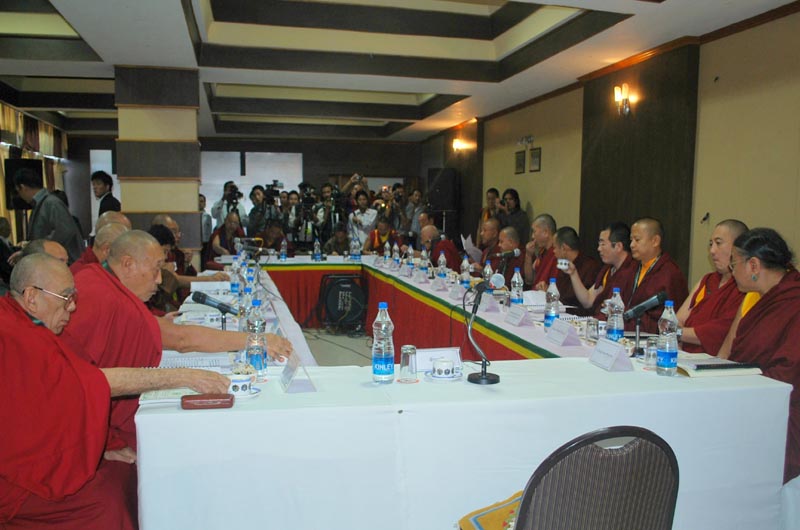 Dharamshala: - The three-day 11th biannual conference of religious leaders and representatives of the four schools of Tibetan Buddhism and Bon religion started this morning in the Himalayan town of Dharamshala.

In his opening remarks, Kalon for Religion and Culture, Mr Pema Chhinjor said that the Tibetan religious leaders through the previous conferences have made remarkable contribution for the sustenance of Tibetan Buddhism and effective administration of the spiritual domain.

"They have also fostered a strong and healthy bond between among Tibetan Buddhist traditions and strengthened the preservation and promotion of Buddhism through a twin-methodology of teaching and practice," Kalon Pema Chhinjor said.

He expressed his deep gratitude to the religious leaders for working in accordance with the wishes of His Holiness the Dalai Lama and their efforts and contribution toward the promotion of Tibet's rich and unique Buddhist and cultural heritage to the Buddhists in the Himalayan region, Russia and Mongolia.

He urged the religious leaders to strengthen their efforts as the survival of Tibet and its unique religious tradition are in danger.

He stressed that special needs to be taken to deal with the Chinese government's machination in devising different kinds of regulations in recognising the incarnations of Lamas and Tulkus.

Extending his greetings to the religious leaders, Kalon Tripa Dr Lobsang Sangay said the 14th Kashag is honoured to get the opportunity to meet all the heads and representatives of the Tibetan Buddhist schools and Bon faith together.

Kalon Tripa spoke about his policies planned for the 5 years ahead based on unity, innovation and self-reliance towards resolving the issue of Tibet.

He said the Tibetan administration will continue to work towards resolving the issue of Tibet through dialogue by firmly adhering to the middle-way policy.

Describing the religion and culture as a soul and essence of the Tibetan people and their civilisation, Kalon Tripa said despite suffering grave destruction under the Chinese communist rule, the religious heads under the guidance of His Holiness the Dalai Lama have been making extraordinary efforts to resurrect Buddhist learning centres and promote Tibetan Buddhism across the globe.

Kalon Tripa called for the support from the Tibetan religious leaders toward the realisation of the Kashag's policies on education and environmental protection.

His Holiness the Dalai Lama will address the second day of the conference on 23 September.

The conference will discuss ways to develop academic studies in Buddhist learning centres, institutionalise a process of conferring of existing or new titles to nuns graduating from Buddhist learning centres, Bhikshuni ordination and review of the status of Religious Affairs Council of Tibetans in Exile constituted in accordance with resolutions passed during the 10th conference of religious heads and by the 14th Tibetan Parliament in Exile during its 7th session on March 26, 2009.

It will review the implementation of teaching science in the Buddhist learning centres among other agendas.

The religious leaders will take in a prayer service at Tsuglagkhang tomorrow morning in memory of all those Tibetans who sacrificed their lives for the cause of Tibet. His Holiness the Dalai Lama will preside over it.