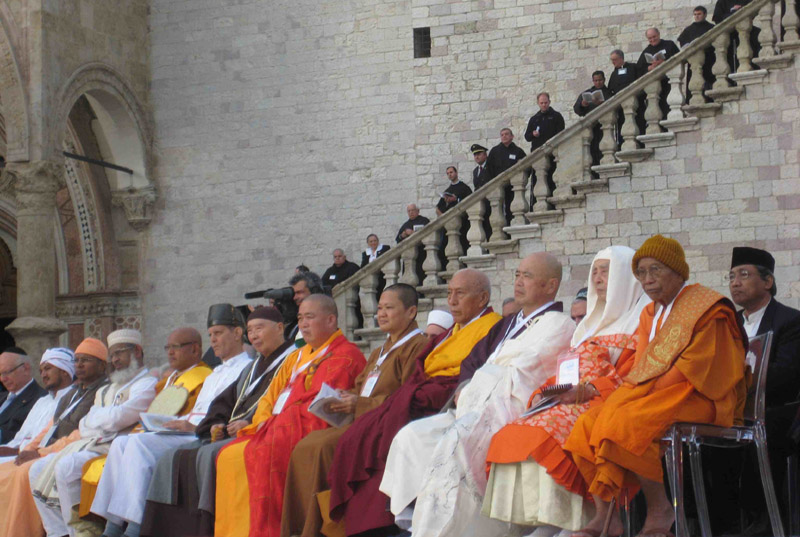 In his 2011 New Year message, Pope Benedict XVI said he intended to travel in October as a pilgrim to Assisi, the city of St. Francis.

The invited inter-faith delegation on 27 October morning travelled on the Pope's train from Vatican Train Station to Assisi.

After words of welcome, a memorial video showed the opening of the 1986's first historic meeting. The video showed a photo of His Holiness the Dalai Lama with Archbishop Desmond Tutu and later a short clip of His Holiness saying praying at Assisi 25 years ago. This was followed by short addresses by some religious leaders.

The main theme of the day was on reflection, dialogue and prayer for justice and peace in the world.

Prof. Samdhong Rinpoche again briefly met with Pope Benedict on 28 October morning in the Clementina hall at the Vatican during the delegation's audience with the Pope.

This was followed by an official luncheon hosted by the Vatican's Secretary of State. Prof. Samdhong Rinpoche was seated in the main table.

The Tibetan delegation included Mr. Tseten Samdup Chhoekyapa, His Holiness the Dalai Lama's Representative in Geneva and Mr. Tenzin Losel. A total of over 280 delegates attend the interfaith meeting.