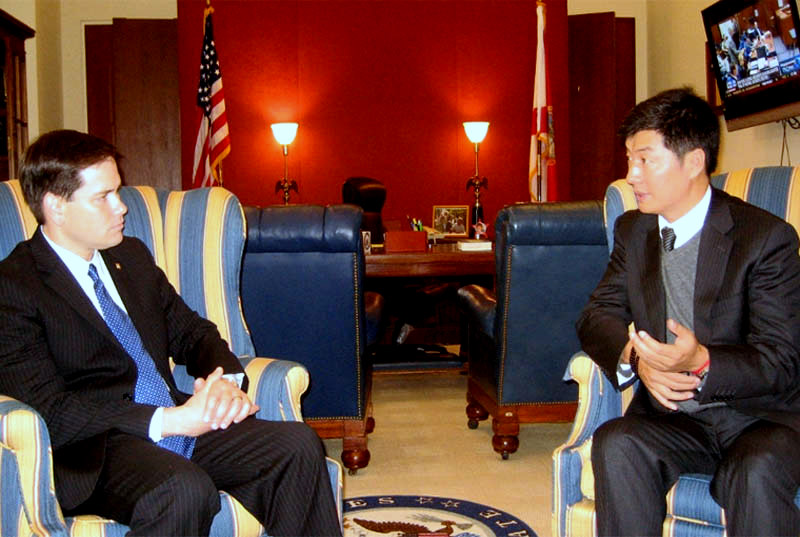 Day four of the visit (November 3) started with a meeting with Senator Marco Rubio, the young and rising Republican Senator from the important U.S. electoral state of Florida. Senator Rubio was remarkably well informed on the current situation in Tibet and demonstrated real interest on Tibet. He lamented President Obama's less than enthusiastic support for the Tibetan issue.

In a meeting of two young leaders (the Senator is 40 years old), the Senator told the Kalon Tripa that he was inspired by the Tibet cause, proud to be associated with the issue and wanted to lend his voice and support. He accepted the Kalon Tripa's invitation to visit Dharamshala. Kalon Tripa and his team came away from the meeting feeling that Tibet had made a new and important friend.

The meeting with Representative Steve Chabot (R-OH) was focused on Nepal as the Congressman had recently come back from a trip to Nepal and Bhutan. Representative Chabot is the Chair of Middle East/South Asia Subcommittee. He expressed concern on the situation of Tibetans in Nepal.

In his meeting with Representative Nita Lowey (D-NY), Ranking Member, Foreign Operations Subcommittee, the Kalon Tripa thanked the US Congress and government for supporting various Tibetan programs and also invited her to visit Dharamshala.

A highlight of day four was the Kalon Tripa's testimony before the Tom Lantos Human Rights Commission. The hearing drew a full house of audience and three of the committee members attended. Dr. Sangay paid tribute to the late Congressman Lantos in his oral presentation and touched on the outbreak of self-immolation cases in Tibet, the transition in Tibetan political leadership, how the hardline policies of the PRC government was not working in Tibet, how the Tibet issue can be resolved, and His Holiness' recent statement on reincarnation and emanation.

Dr. Sangay was warmly welcomed by both the Co-Chairs of the commission - Representative James McGovern (D-MA) and Representative Frank Wolf (R-VA). Rep. Wolf in particular spoke out strongly against the Chinese government and described it as a "fundamentally immoral and evil government." He stated that the Chinese government was bound to fall as they had taken a page out of the playbook of Nicolae Ceau?escu of Romania.

The Congressman was particularly upset to learn that the Nepalese government had refused to issue exit passes that would allow 5000 Tibetans to immigrate to the US. He, along with Rep. McGovern, stated that they would write and summon the Nepalese ambassador in Washington, DC and request the Nepalese government to allow the Tibetans to leave Nepal. The Congressman threatened to zero out all US foreign aid to Nepal if the latter did not issue the exit visas to the Tibetans.

Another important witness testifying before the Commission was Kirti Rimpoche whose trip was organized by the Central Tibetan Administration (CTA). Since many of the Tibetans who had committed self-immolation in Tibet were related to Kirti Monastery, CTA felt it would be beneficial for the Committee members and staff to hear directly from Rimpoche.

Immediately following the hearing, the Kalon Tripa had a meeting with Democrat Leader Pelosi, a long and steadfast friend of Tibetans, and her staff, Jonathan Stivers. Leader Pelosi expressed admiration for His Holiness in his move to transfer his political powers and welcomed the transition in Tibetan leadership to the next generation of Tibetans.

The day ended with an interview with Al Jazeera for their The Stream program.

Day five and the last day of the visit started off with interviews with VOA Mandarin service and with the VOA Tibetan television program. Kalon Tripa also met with Washington Post, which published his op-ed on the unfolding tragedy in Tibet centered around the growing cases of Tibetans committing self-immolations. The final event of the day was a reception organized by the Capital Area Tibetan Association (CATA) both for the Kalon Tripa and Kirti Rimpoche.