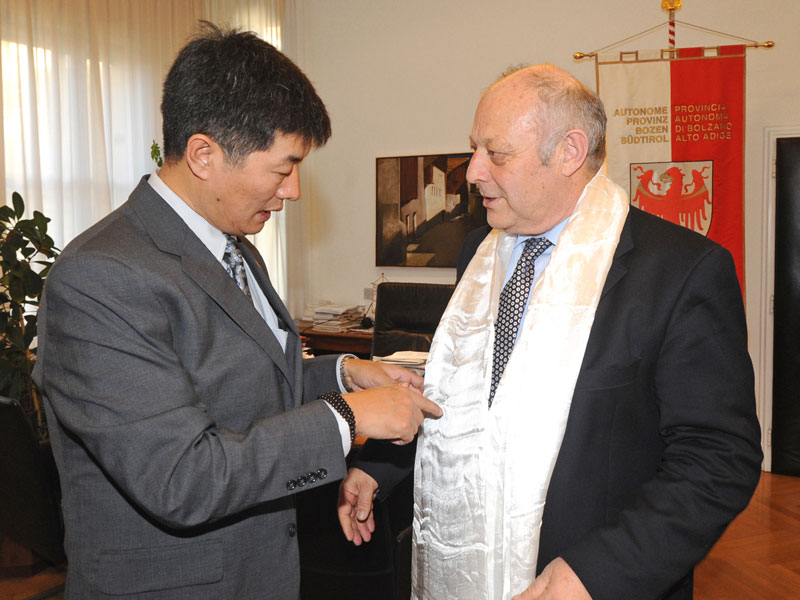 Milan, 28 February: There is a deep and strong friendship between our people, said President Luis Durnwalder of South Tyrol Autonomous Region in Italy to Kalon Tripa Dr. Lobsang Sangay this morning. "It is good to know that a young and dynamic leader will continue this friendship," he said.

South Tyrol has three ethnic groups and the autonomy status had bought peace and security in the province. China can learn from the South Tyrol model of autonomy said President Durnwalder.

Kalon Tripa said that the unique autonomous status that South Tyrol enjoys is well known amongst the exile Tibetan Community.

In the afternoon, Kalon Tripa called on President Lorenzo Dellai of the Autonomous Region of Trento. The President congratulated Kalon Tripa on his successful election and said he has been monitoring the tragic situation in Tibet. He further said he have supported the Tibetans in the past and will continue to do so in the future.

During his meetings with the leaders of South Tyrol and Trento, Kalon Tripa said that the continued repression in Tibet by the Chinese authorities had resulted in more protest from the Tibetans. The situation in Tibet is very grim with increasing number of self-immolations. Total of 23 self-immolations have taken place since February 2009 of which 15 have died.

Before leaving for Milan, Kalon Tripa spoke at the around table discussion organized by the University of Trento on "The autonomy and Tibet".

On his arrival in Milan around 9pm, over 50 Tibetans welcomed Kalon Tripa at the Ghe Pel Ling Center Tibetan Buddhist Centre. After dinner, Kalon Tripa addressed the members of the Tibetan community.

Kalon Tripa thanked the Tibetan community for taking part in various global joint initiatives on Tibet and asked the community members to continue their active participation in the Tibetan issue.