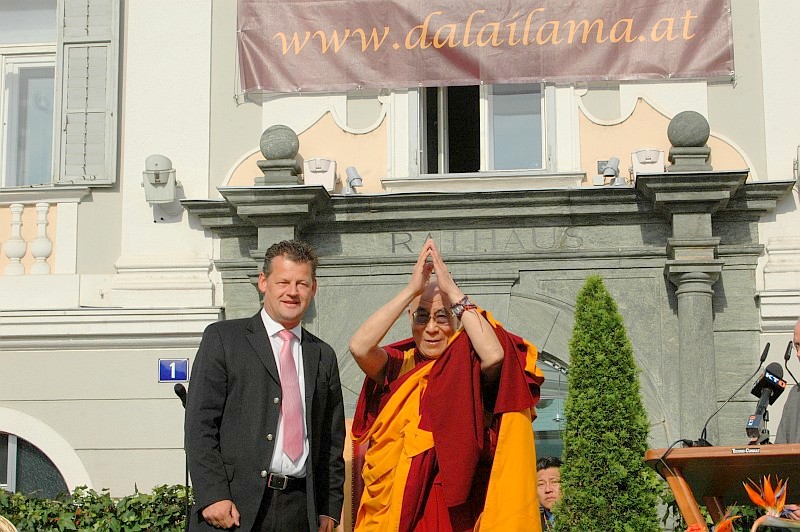 He then made a short visit to Hüttenberg, the birthplace of Mr. Heinrich Harrer, the author of Seven Years in Tibet. He addressed the crowd and media at Rieftanzplatz Ground in Hüttenberg, excerpts of which are given below:

"Please, think more inward and not just simply numbing from distraction. Distraction is just through sensorial organs and experiences. That temporarily gives some self satisfaction. It may not remain for long. And also, sensorial devil in form of joyfulness can make a mental level more worried, more anxiety. So if mental level is happy, joyful or blissful then sensorial level difficulties can be easily worked out or subdued... "

"Today and tomorrow, I am giving a lecture on Buddhism but I always used to stress that people have different solutions. I always stress that it is very important and safer to follow your own traditional, religious belief. At the same time, it is quite useful to learn the different ideas particularly regarding promoting compassion, forgiveness, tolerance and you can learn from other traditions and use in your own traditional religious belief. So that is, I think, an important factor in developing mutual respect and mutual understanding. So, my second commitment is promotion of religious harmony." 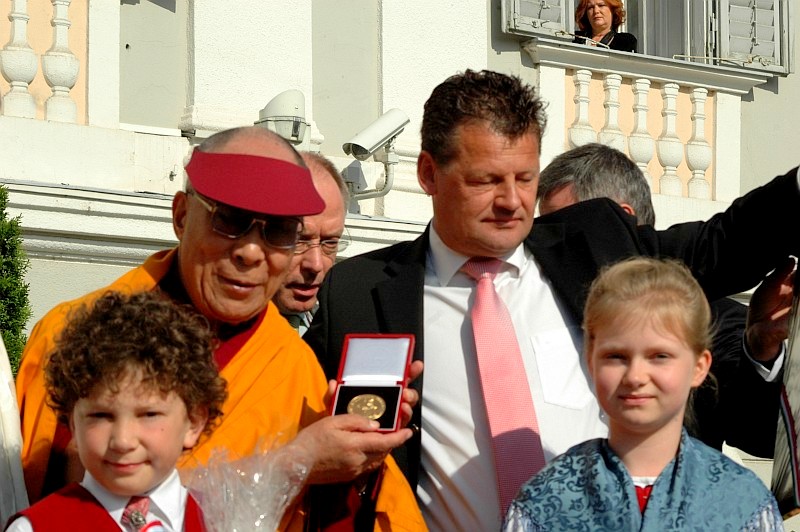 After his speech, His Holiness was awarded a medal of honour called the Golden Sign and a citation in recognition of his world wide and international peace efforts. This was awarded to him by the city council of Klagenfurt, the provincial capital of Carinthia.

He also consecrated the construction of Tibet Centre-International Institute of Higher Tibetan Studies which was established in 2006 under his patronage and support from the Regional Government of Carinthia.

From tomorrow onwards for two days, in Klagenfurt, His Holiness the Dalai Lama will teach Tibetan Buddhism and give a pubic talk on The Art of Happiness. On 20th May at Salzburg, His Holiness will give the keynote address on World Peace and Universal Responsibility jointly organized by the Alpine Peace Crossing and the Tibet Centre. Later, His Holiness will take part in an interfaith dialogue - Harmony in Diversity organized by the University of Salzburg and the Tibet Centre.

On 26th May, His Holiness the Dalai Lama will address the European Tibet Solidarity Rally in Vienna, in the last leg of his European visit. The European Solidarity Rally is a demonstration for people from all over Europe to come to Vienna and raise their voice to support a peaceful and humane solution for Tibet.