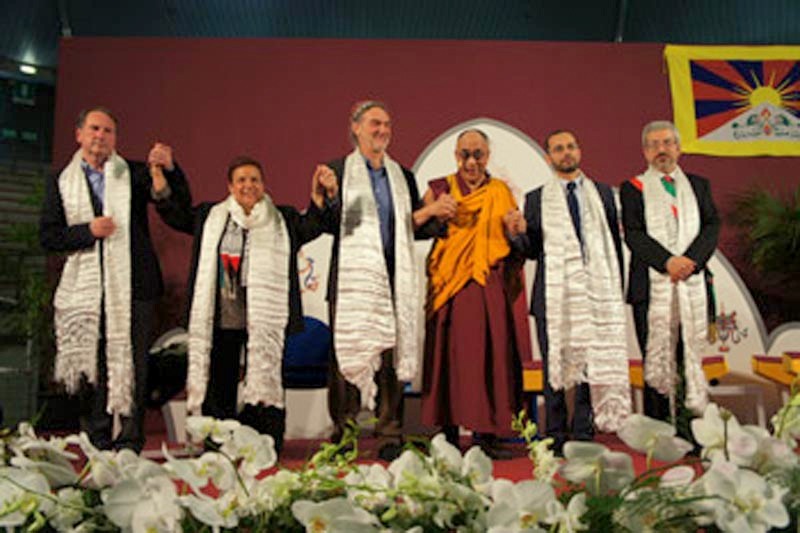 Dharamsala: Udine, Italy, May 23, 2012-His Holiness the Dalai Lama is in Udine, Italy for two days to make three public appearances.

The first of three public appearances took place yesterday as a guest speaker in the "Role of Religions in Promoting Justice, Peace and the Protection of the environment," alongside Bassima Awad, President of the Italian-Palestinese Cultural Institute Al Quds, Rabbi Jeremy Milgrom, a member of Rabbis for Human Rights, and Izzedin Elzin, an Imam in Florence, chair of the Italian Union of Islamic Communities

His Holiness greeted the audience as brothers and sisters and reminded them that the ultimate source of happiness is within ourselves. As human beings, he explained, our capacity for intelligence enables us to fulfill our aspirations. The key to fulfillment, he explained, is warm-heartedness and, a calm mind. If in addition to a calm mind we adopt a holistic view of our circumstances we can develop self-confidence.

His Holiness also remarked on the Israeli-Palestine conflict, "This is a complicated issue, but the reality is that out brothers and sister must find a way to live together. What can make a difference is the development of human values, for which we are equipped from birth. But we have to make the effort." 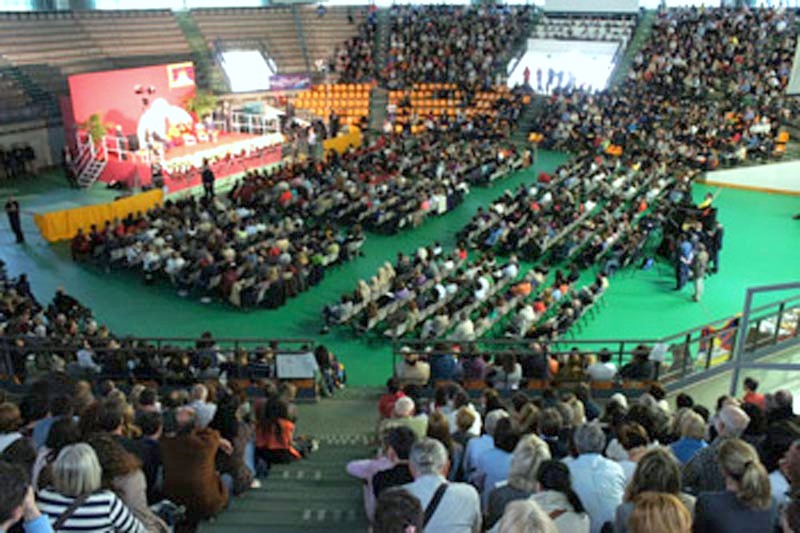 He added that his second commitment is to foster inter-religious harmony-in India, where almost all the world's major religions flourish, provides a remarkable model of pluralism and mutual regard.

"It's by getting to know each other that we develop respect. And this is why I am happy and honored that we have been able to sit together and share our common concerns."

At the end of the event, His Holiness was presented with the key of Udine by Mayor Furio Honsell.

The afternoon event, "Promoting Non-Violence and Compassion Against Aggressiveness and Violence," was moderated by Dr. Giovanni Marzini, and addressed by Vito Mancuso, theologist and philosopher, and Franco Fabbro, a neurophysiologist. His Holiness made clear that as far as he is concerned the demarcation between violence and non-violence is less to do with the physical appearance and much more to do with motivation.

As far as a scientific appraisal of violence, non-violence, compassion and aggression is concerned, His Holiness has taken an interest in the workings of the brain for nearly 40 years. He has regularly collaborated with scientists for approximately 30 years. Recently he has proposed investigations of the difference between sensory and mental experience.

When asked about adopting a non-violent approach to the environment, His Holiness said that we cannot afford to wait for others to act first.

Today, His Holiness will speak to university students from Udine and Trieste at the event, "Holistic Training of the Mind: Spiritual, Humanistic, Scientific and Technological," before leaving for the Yeunten Ling Tibetan Institute in Huy, Belgium.