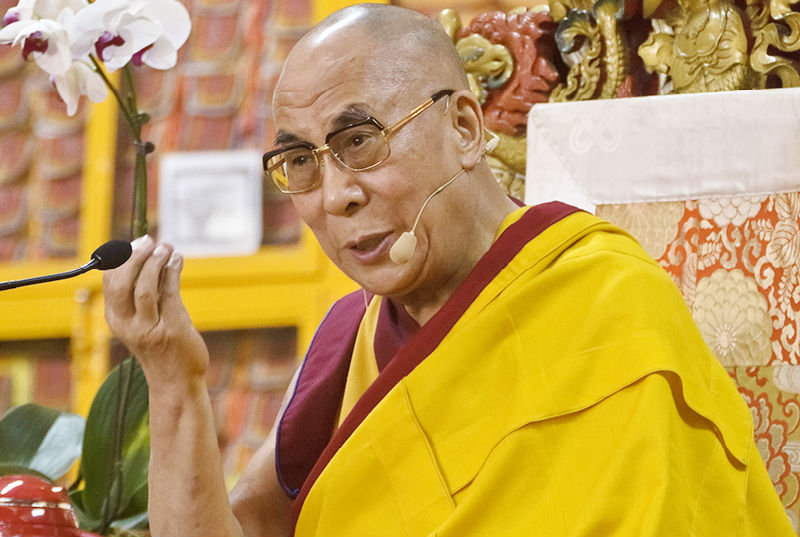 Dharamshala: - Day two of His Holiness the Dalai Lama's teachings on Atisha's "Lamp for the Path to Enlightenment" continued at the main temple in Dharamshala, India. The spiritual leader of Tibet educated furthermore into the sacred 11th century text, on October 2nd2012: the second of four days of teachings.

The gathering, which included over 800 Taiwanese guests and visitors from over 60 countries, entailed insightful knowledge by one of the world's most esteemed spiritual leaders; into one of Tibetan Buddhism's most innovative texts.

Welcoming the audience warmly, His Holiness continued from the previous day by elaborating on how individuals can progress along their spiritual path; incorporating both body, speech and mind.
His Holiness stated:

"Buddha bodies cannot be obtained just by wishing for them; you have to follow the Bodhisattva paths", adding that this will lead to a more purified state.

"In order to cultivate and experience compassion" the Dalai Lama affirmed: "one should care about sentient beings. One should also be aware of suffering"; emphasising that faith and confidence were vital to achieving this.

"With a biased attitude, one will not be able to see reality as it is. You should be able to make judgements with your intelligence, and pursue the path".

"In Buddhism in general, it is very important to look at reason and logic. We have to be able to use reasoning; we should use both proof and reason".

His Holiness drew vividly upon His youth in Lhasa, incorporating His past into the teachings seamlessly:

"When I was in Lhasa, I used to watch the moon and the sunset. Through my telescope, I could see the moon had hills; and craters on the surface. The shadows on the moon would change as the sun would set". His Holiness recalls inviting teachers one night to witness this, and they agreed with the young leader. The young Dalai Lama concluded that although Tibetan tradition stated that both the sun and the moon had their own light, through science and logic one could see that this was not the case. He reiterated that Buddhist teaching must be tested, similar to science, as well as being believed.

Towards the end of the teachings His Holiness warned against too much attachment, and grasping, in one's life.

"When we fled Tibet in 1959, I couldn't take anything from my childhood, or [possessions] from the 13th Dalai Lama. In terms of resources, perhaps it is best to have friends and relatives" He said.

"One has to be able to see what is beneficial; not just in the short term but in the long term" His Holiness explained. "Something which may be pleasurable now but harmful in the long-term must be avoided".

Concluding, His Holiness drew the second day of teachings to an end for the afternoon. Having been treated to enlightening lessons in Atisha's "Lamp for the Path to Enlightenment", as well as the generosity of Tibetan culture, the guests wound their way out into the crowded streets of Dharamshala, surely eager for the next day of teachings to begin.

The third in the series of four teachings will continue on October 3rd 2012 in the Main Temple; Dharamshala. A live webcast, followed by translations into Chinese, English and Russian languages is available on: http://dalailama.com/webcasts/post/255-lamp-for-the-path-to-enlightenment