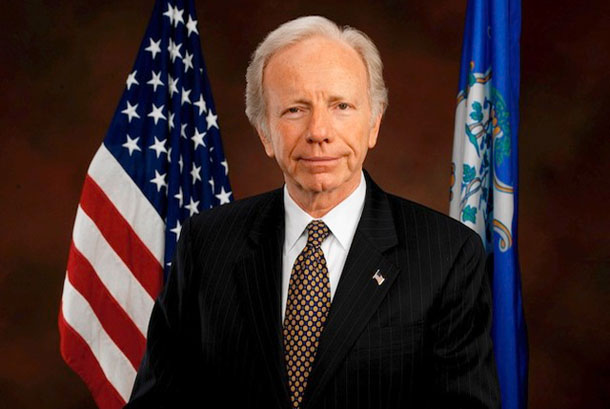 Dharamshala: -  "Deeply concerned over the human rights situation for the six million Tibetan people  in Tibet, US Senator Joseph Lieberman said Monday in a statement issued on Global Day of Action for Tibet. He said he was saddened about the rise in self-immolations in Tibet, and agree that the root cause of these acts of despair can be found in the repressive policies of the Chinese government.

"It is both a pleasure and an honor to send greetings to you from Washington, DC today, the Global Day of Action for Tibet. I regret that I cannot be with you in person this afternoon as you gather before the United Nations in solidarity and in support of your brothers and sisters inside of Tibet," Lieberman said in the statement.

"I wish first to express my appreciation for the leadership of His Holiness the Dalai Lama. I had the great honor of meeting His Holiness earlier this fall in my home state of Connecticut. I thanked his Holiness for his historic decision to devolve his political power in favor or democracy, which I believe will strengthen the legitimacy of the Tibetan cause among the international community and sustain it for decades to come," Lieberman added.

The US senator stated that the "election held for Tibetans in March 2011, which brought Dr. Lobsang Sangay to office as Kalon Tripa, involved voting by tens of thousands of Tibetans living in exile in over thirty countries, including nearly 100 Tibetan-Americans in Connecticut alone. "

He said he has had the great privilege of meeting the Tibetan political leader (Sikyong) three times in Washington, DC. "He is a man of considerable intellect and accomplishment, and he has proven to be a leader of courage and conviction. The Tibetan people have chosen wisely in electing him as their Prime Minister," Lieberman further said.

He hopes that "the self-fulfillment of democratic governance exercised by Tibetan refugees can provide hope and inspiration to those in Tibet and China who yearn for the fundamental freedom to choose their own government and leaders."
Senator Lieberman said he remains "deeply concerned by the situation for the six million Tibetans living in the People’s Republic of China today. This is a community that has never been permitted to participate in a free and fair election of the sort that have taken place among Tibetans in exile."

"In fact, this is a community that is governed by authorities who have deemed that carrying a copy of the Universal Declaration of Human Rights or a simple photograph of his Holiness the Dalai Lama to be illegal and punishable acts. It is a community that has faced brutal repression and violence and that has, for decades, been denied their fundamental rights, including the freedoms of expression, assembly, and association," he continued.

"I am deeply saddened and concerned about the rise in self-immolations in Tibet, and agree that the root cause of these acts of despair can be found in the repressive policies of the Chinese government. For this reason, earlier this year, I joined my colleagues in the United States Senate to introduce a resolution mourning the deaths of Tibetans who have self-immolated and deploring the repressive policies targeting Tibetans," Senator Lieberman stressed.

"Our resolution also called on the Chinese government to release all persons who have been arbitrarily detained; to suspend implementation of religious control regulations; to cease the intimidation, harassment and detention of peaceful protesters, and to allow unrestricted access to journalists, foreign diplomats, and international organizations to Tibet. I am happy to report that our resolution unanimously passed the Senate," he further stated in the statement.

"Today, I say to those in Tibet who are striving to secure their fundamental freedoms: the United States Congress has not and will not forget about you and your cause," said in the statement issued by US Senator Lieberman on Global Day of Action for Tibet.

Joseph Isadore "Joe" Lieberman is the senior United States Senator from Connecticut. A former member of the Democratic Party, he was the party's nominee for Vice President in the 2000 election.