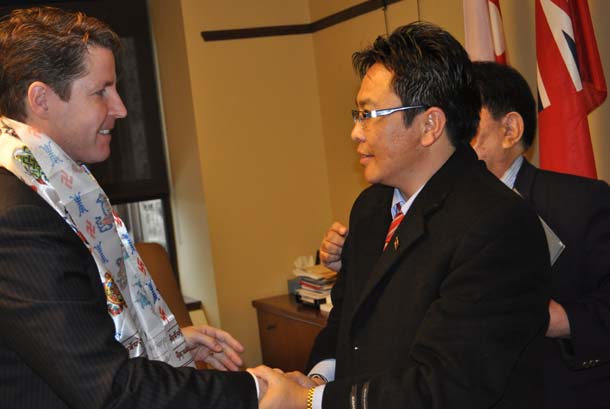 Dharamshala: - On December 10th, International Human Rights Day, members of TYC were received by members of the Canadian Parliament and Ministry of Foreign Affairs who stressed their continued support for the Tibetan cause and discussed ways to continuing supporting the work of TYC.

Their visit to the Canadian parliament began with David Sweet (Conservative Party of Canada, CPC), who is also on the Sub-Committee on Human Rights and International Trade, as well as the Parliamentary Friends of Tibet.

Mr. Sweet reassured TYC members that he would further investigate recent self-immolations within Tibet and would also propose a resolution on Tibet to be passed by the Canadian parliament. He also suggested that TYC Vice President, Dhondup Lhadar, testify at a future meeting of the Committee on Human Rights and International Trade.

TYC gave Mr. Sweet a document containing profiles of all Tibetan self-immolators and thanked him for his continued support for the Tibetan cause. Mr. Sweet had proposed the motion to extend honorary Canadian citizenship for His Holiness the Dalai Lama in 2006.

TYC next met with another member of CPC, Bernard Trottier, a staunch supporter of the Tibetan cause who expressed the need for a dialogue with the Chinese government at various levels. Following this meeting, the group met with Davinder Shory (CPC), who had helped with the previous Tibetan elections in exile and who continues to support the issue of Tibet within the Canadian Parliament.

The group then met with Wayne Marston (New Democratic Party, NDP), who is also a member of sub-Committee on Human Rights and International Trade. Mr. Marston proposed an information session be scheduled in the coming year in which all parliamentarians could further discuss the issues inside Tibet. TYC thanked Mr. Marston for his continued support.

TYC then met with Elizabeth May of the Green Party, who continues to be an advocate for Tibet and reassured TYC of her continued dedication. The last meeting of the day was with Rob Anders, a member of parliament, who stressed the need for further involvement within parliament. Mr. Anders discussed the idea of Tibetans interning within the House of Commons to further develop a strong relationship.

These meetings detail TYC's efforts to connect with global leaders and the partnerships that it continues to develop with other governments.