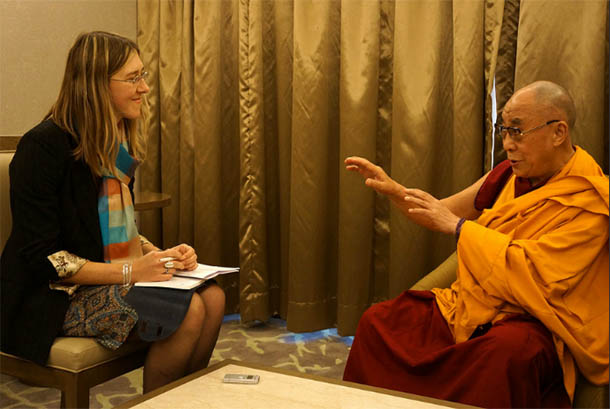 Dharamshala: The spiritual leader of Tibet, His Holiness the Dalai Lama has said that whilst he would very much like to visit Russia, he "doesn't want to put anyone to any inconvenience."

The 77-year old Nobel Peace Prize Laureate, who has several times been denied a visa enabling him to visit Russia, made the comment during a Russian television interview coinciding with a four day teaching for Russian Buddhists, on December 25.

In response to interviewer Olga Lipich's assertation that many of those attending the teachings on Shantideva's eighth century text, a Guide to the Bodhisattva's Way of Life, looked forward to his coming to Russia, asking when that might be, he said: "I came to Russia in 1979 and 1982, when it was still part of the USSR and it seems ironic that I was able to come when it was still a totalitarian communist state, but now that it's free, it seems I can't.

"Generations of Russian Buddhists have had a unique relationship with the Dalai Lamas and with Tibetans, so a historical link exists.

"I am naturally concerned about their well being and indeed for the Russian Federation as a whole. My predecessor, the 13th Dalai Lama, had a connection with and concern for Russia. I also have many Russian friends who are not Buddhists."

Laughing, he concluded: "Whatever happens, I don't want to put anyone to any inconvenience."

Despite the failure of the Russian government to issue him a visa, the Dalai Lama continues to enjoy popular support in the world's largest nation, particularly in the Tyva Republic (Tuva) in which nearly 62 per cent of the population claims to be Buddhist, and the neighboring Republic of Buryatia, both of which border Mongolia.

On December 21 last year, he received an honorary doctorate in recognition of his "outstanding contribution to freedom, human rights, religious harmony and environmental protection" from Tuva State University.

Almost 1500 devotees, including over 1000 from Russia, attended the teaching at the Kempinski Ambience Hotel, in Delhi, between December 24 – 27.

In a croaky voice acquired during a month of teachings in Karnataka, South India, in November and December, followed by a four day inter Buddhist dialogue between Tibetan and Thai practitioners, in Delhi, the Dalai Lama stated that the source of all our problems is self-centeredness, adding: "I read recently that in the twenty-first century, of the 7 billion people alive today, one billion describe themselves as non-believers, which means 6 billion regard themselves as believers in one religion or another.

"But when we see that apparently religious people indulge in corruption and don't seem to want to reduce their self-centeredness or combat their destructive emotions, we might ask how deep their spiritual belief really is."

He added: "I have no blessings to give; I don't think of myself as the Dalai Lama, but as another person like everyone else. The important thing is that we want to lead a happy life and to do that we need to educate ourselves."