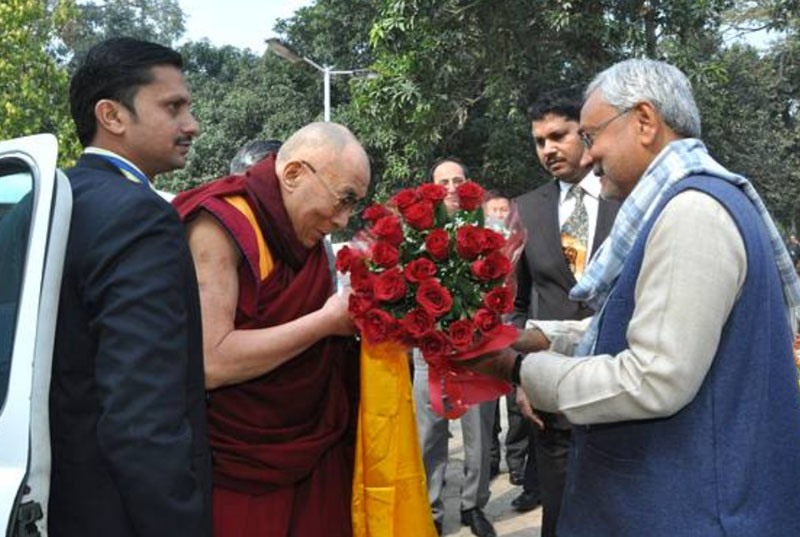 Patna, Bihar: - On arrival in the ancient Indian city of Patna on January 3, the spiritual leader of Tibet, His Holiness the Dalai Lama was warmly welcomed at the airport by Chief Minister and other top leaders of the Bihar state. He was then driven a short distance to the State Guest House, where he retired for the night.

On January 4, His Holiness responded to their welcome saying, "I am very happy to be back in this historical city of Patna, the city of Ashoka, and former President Dr Rajendra Prasad - a great scholar - and social activist Jayaprakash Narayan. In fact I was pleased to notice Thursday, January 3, that the airport is named after him.

"Of course, Patna is quite significant in the history of Buddhism and Buddhism is known for its teaching about karuna or compassion. However, while nearly all religions have a similar message about kindness, compassion and forgiveness, what really distinguishes the Buddha's teaching is his explanation of interdependence or dependent arising, pratityasamutpada in Sanskrit. This is very helpful in combating the main troublemaker in our minds: our destructive emotions.

"I appreciate the interest the present government of Bihar is showing in the Buddha dharma."

"The main practices of Buddhism are compassion, tolerance, forgiveness and a sense of self-discipline these are qualities that help us lead our daily lives with a calm mind. Too much jealousy, attachment or anger creates stress. So without talking about nirvana, the next life, or heaven, the message of love, tolerance and compassion helps us lead a good life now as human beings.

The afternoon events took place at the Buddha Commemoration Park, His Holiness and the Chief Minister walked together to the Pataliputra Karuna Stupa, where His Holiness emphasised the need for it to become more than just a place of worship.

The Buddhist leader envisages a learning centre where Buddhists, scientists and others can study and mutually enrich their knowledge.

"As a Buddhist monk I appreciate how the world's major religions have flourished side by side in peace in India for the last thousand years. This interreligious harmony that has become part of Indian tradition is very relevant today, particularly when we see elsewhere that sadly religion can be a source of conflict.

"Finally, as a student of the Nalanda tradition, I am convinced that in addition to prayer we need clear thought and logical analysis. Ancient Indian thought, Nalanda thought, promoted the idea of pratityasamutpada, interdependence or dependent arising and I believe we should regard this today less as something religious and more as an object of academic study.

"In an ongoing dialogue I have had with modern scientists over the last 30 years or more we Tibetans have learned about cosmology and subatomic particles, and from ancient Indian thought, modern scientists have learned a great deal about the functioning of the mind and emotions. Scientific findings reveal that peace of mind contributes to physical health, but physical solutions to mental unrest are at best short-lived. What we need to do is train the mind."

"I hope that under your leadership, as I mentioned before, this can become a learning centre, somewhere where the ancient texts can be studied. I believe that we can regard the collection of Buddhist scriptures under three headings: Buddhist science, philosophy and religion and that the science and philosophy might be of interest to anyone, not only Buddhists.

"But in addition, today India and many other countries are facing something of a moral crisis. Increasing the police force won't have much effect. What we need is self-discipline on the basis of ethics, secular ethics. In many ways Indian tradition has supported secular ethics for hundreds of years; now it's time to share them with the rest of the world.

His Holiness visited Chief Minister's residence in the city, according to media reports.

Patna, capital of modern Bihar state, is regarded as one of the longest inhabited places in the world. It first gained significance when the Magadhan King, Ajatashatru, a contemporary of the Buddha, shifted his capital here from Rajgir.

Two centuries later, the great Mauryan Emperor, Ashoka, who in his maturity embraced and fostered Buddhism and who became the first ruler of a largely united India, made his capital in Patna.

The present government of Bihar, led by Chief Minister Nitish Kumar, has taken an active interest in Patna's and Bihar's Buddhist heritage and in May 2010 invited His Holiness to inaugurate the Buddha Smirti Park.