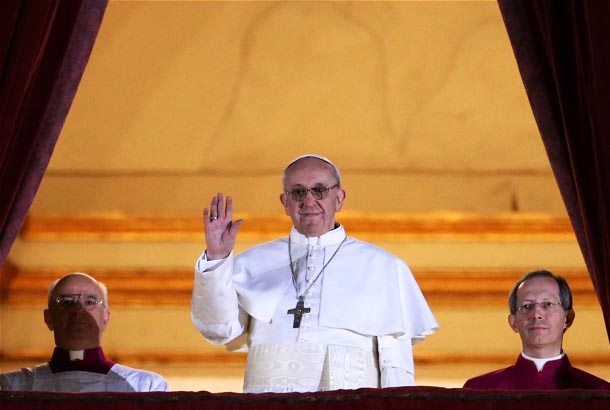 Dharamshala: - The spiritual leader of Tibet His Holiness the Dalai Lama congratulates Cardinal Jorge Mario Bergoglio of Argentina, who has been chosen as the new Pope to head the Catholic Church.

Bergoglio, who will be known as Pope Francis, was chosen on Wednesday as the first ever Pope from the Americas and the first from outside Europe in more than a millennium.

"May I offer you my greetings and sense of joy on your historic election as the Pope," His Holiness expressed in his congratulation statement.

"Although I am not very familiar with many Catholic saints, I do know about St Francis, having visited Assisi and attended inter-religious gatherings there," the Tibetan spiritual leader stated.

"His discipline, the simplicity of his way of life and his love for all creatures are qualities that I find deeply inspiring. I am moved to know that his is the name you have chosen for your papacy," said His Holiness.

Recalling his cordial meetings with Pope Paul VI, John Paul II and Benedict XVI and other Christian brothers and sisters, His Holiness looked forward to meeting the new leader of the Roman Catholic Church:

"I am very pleased to have met and enjoyed friendly conversations with your immediate predecessors and, for the last forty years or so, have participated in fruitful exchanges with my Christian brothers and sisters. I hope that I may have the honour of calling on you too sometime in the near future," His Holiness the Dalai Lama further added.

Leaders across the world, including US president Obama and UN secretary general ban ki-moon congratulated the election of Cardinal Jorge Bergoglio as the new Pope, considering it a "historical moment" and a fact that makes the "Church more universal than ever."