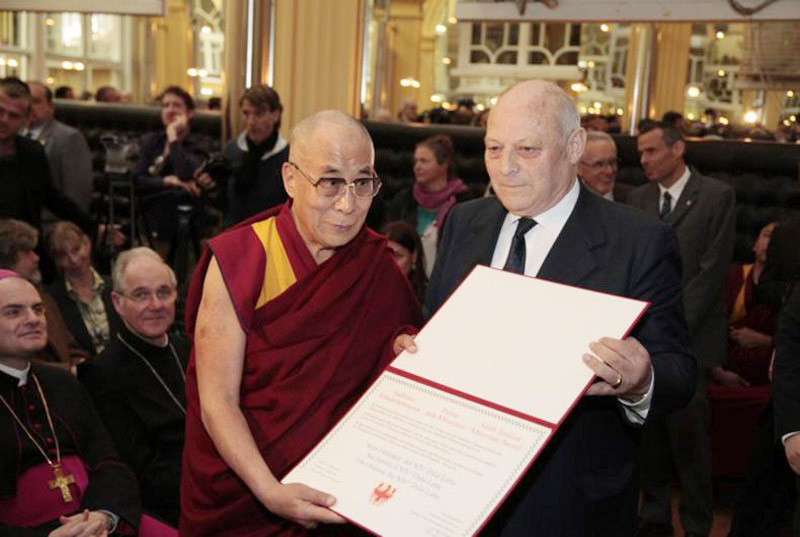 Bolzano, South Tyrol, Italy, 10 April 2013 : - The spiritual leader of Tibet His Holiness the Dalai Lama on Wednesday received a special prize for his continuing efforts to defend the Tibetan cause through peace and non-violence principals. The minorities prize is intended to represent a sign of recognition on the part of Alto Adige's institutions and His Holiness' untiring and peaceful commitment to the Tibetan cause, according to the South Tyrol government.

The Alto Adige minorities prize presented on April 10, 2013 by Luis Durnwalder, the president of the Bolzano provincial government of South Tyrol, Italy. Mr Durnwalder expressed his pleasure that the spiritual leader of Tibet had come to visit once again in his autonomous region, a sign, he felt, of the firm friendship between them. His Holiness acknowledged that the friendship and support that South Tyrol has shown to Tibetans over the years. His Holiness offered thanks on behalf of himself, the Tibetan community in exile and the 6 million Tibetans in Tibet.

Proceedings for the presentation of the Minority Award opened with the playing of a Mozart sonata for flute and harp. The Master of Ceremonies welcomed His Holiness and requested President Durnwalder to address the gathering. He began:

"Your Holiness, we have much in common. We have different histories and different culture, but what we share is that we represent minority populations facing similar problems. There are 164 countries in the world where minorities live, and while many accord them their rights, others do not show such respect. They try to dominate and suppress their minorities, often resorting to the use of force and violence. Ultimately, it is the non-violent approach that succeeds, because it is peaceful and friendly. Your Holiness has become an international ambassador for non-violence and support for minorities, and we are pleased to welcome you here again."

He declared that South Tyrol is like a laboratory conducting an experiment to ensure the survival of minority populations. The Minority Award had been set up to shed light on the problems minorities face. This year, though he said, the light that it might have shone on the situation of Tibetans is like a candle in comparison to His Holiness's efforts. Nevertheless, the message that South Tyrol wants to send is that the rights of minorities should never be surrendered and that they will work to remind others of this.

When His Holiness was invited to respond, he said that he would like to follow the President's example and at least begin what he had to say in his mother tongue. He said:

"It's a great honour for me to accept this award. And while offering my personal thanks, I would like to think that this award has been given to Tibetans who are still struggling for freedom. I very much appreciate this award being given by a group of people who have been staunch friends and who have blazed the trail to autonomy before us.

"We Tibetans are trying to achieve genuine autonomy within the People's Republic of China. We have our own language with its own script, and a long history, therefore it's logical that we should want to achieve meaningful autonomy. Our focus is not merely on the so-called Tibet Autonomous Region, but on all three provinces where Tibetans live, spread as they are through five Chinese provinces."

He noted that in the thirty years since proper autonomy has been achieved in South Tyrol, economic well being has risen from amongst the poorest to one of the best in Italy and quality of life has improved too. This he attributed to the freedom given to people's natural creativity, which he said was very encouraging.

He concluded with a short explanation of his own retirement from political responsibility, which he has transferred to the elected Tibetan leadership. Meanwhile, considering himself just one among 7 billion human beings, every one of whom seeks happiness and shuns suffering, he works to promote affection and warm-heartedness as the basis on which these goals can be achieved. Secondly, bearing in mind that religions espouse tolerance and forgiveness, for them to become sources of conflict is a contradiction, so he has taken a commitment to encourage inter-religious harmony. He conceded that there are differences among religions in terms of their various views and approaches that accommodate people's various aptitudes, but they share a common goal of fostering love and compassion in people's hearts. Finally, where he was previously dedicated to the Tibetan struggle for freedom, he has now turned his focus to preserving Tibetan Buddhist culture, which as a culture of peace and compassion is of value not only to Tibetans but to the world at large.

President Luis Durnwalder then presented His Holiness with the Minority Award in the form of written citation. Meeting the press afterwards, His Holiness was asked his reaction to the self-immolations that continue to take place in Tibet. He replied:

"For years I have considered myself a free spokesperson for the people of Tibet, but those people are my boss. Those who are pursuing this course of action are doing so not because they are drunk or beset by family problems, but because of the desperate situation in which they find themselves. Because they are the boss, there is nothing for me to say. If I were to ask them to stop, I'd have to have an alternative to offer and I don't. All we can do is pray."

Asked how he kept his even temper and happy outlook, His Holiness remarked that he wanted to live a happy life and in order to do that a calm mind is essential. He said he recognises that anger and frustration utterly destroy our peace of mind, so he restrains them. We must approach problems with a calm mind and taking others' interests into account is one way to ensure we preserve that.

Meeting the press he was asked about the struggle for Tibetan autonomy and replied that the South Tyrol served as a good working model. Autonomy for Tibet had been discussed in 1951, and again in 1956. Mao Zedong agreed to it, it is provided for in the Chinese constitution, and up until 1959, Tibetans worked to achieve it.

Invited to advise how world peace can be achieved, His Holiness was unequivocal that peace in the world depends on individuals' first finding peace within. World peace will not be found through prayer alone, but by overcoming anger, hatred and our array of disturbing emotions.

In an interview with Trento TV it was suggested that people are scared of China; are they right? His Holiness responded that China is the world's most populous nation and its people have a right to grow and develop, so trying to contain China is wrong. He said that change will come about, but it may not be immediate. The new leaders may be aware of the need for change, but have not yet discovered how to bring it about.

President Luis Durnwalder hosted a lunch for His Holiness, his cabinet and leading representatives of the local clergy. In the afternoon, His Holiness was invited to speak at the European Academy and answer questions drawn from his book 'Beyond Religion'. He began by clarifying that the title, selected by the publisher, should not be misunderstood. The book deals with secular ethics whose basis is the biological factor of affection that we all respond to as soon as we are born. His Holiness reiterated that when he uses the word secular he means having respect for all religions and non-believers too. He said he has read that of the 7 billion human beings alive today, almost 1 billion declare themselves non-believers. However, considering how little their piety in the temple or church affects so many people in their real lives these days, he feels that many more should really be counted as non-believers. Since religion seems ineffective in such cases, secular ethics may have greater appeal.

The important point His Holiness said he wanted to make is that dealing with our emotions, which is one of the ways to put secular ethics into effect, will be achieved by improving awareness not through prayer. When we become angry, prayer will not help. We need to understand how our emotions work. We need to pursue this through education and coming to understand the map of the mind.

Asked whether he was an optimist or pessimist, His Holiness unhesitatingly declared that he is an optimist. He recalled his quantum physics teacher Carl Friedrich Freiherr von Weizsäcker pointing out that at the end of the second world war in every German eye the French were an enemy and the Germans were similarly enemies for the French, and yet in a generation that had all changed. Likewise the British Queen Mother, who had lived since the start of the twentieth century, told him that life had hugely improved in that time. She said that when she was young there was no talk of self-determination or human rights, concepts now widely accepted. To a question about China he said that it is essential to keep in touch with the Chinese. One of their biggest problems is ignorance, a result of not being properly informed. Chinese have written to His Holiness to tell him that if more Chinese were aware of the Middle Way approach, the attempt to find a mutually beneficial solution to the problems of Tibet, they would support it. He stressed the power of truth.

Finally, asked if he would come again to South Tyrol, His Holiness said that he had been invited to do so over lunch, but that early this morning he had opened his window and the sound of bird song filling the air made him think that he would like to come back and spend several days here in the future. Tomorrow, he will be a guest in the autonomous Province of Trento.