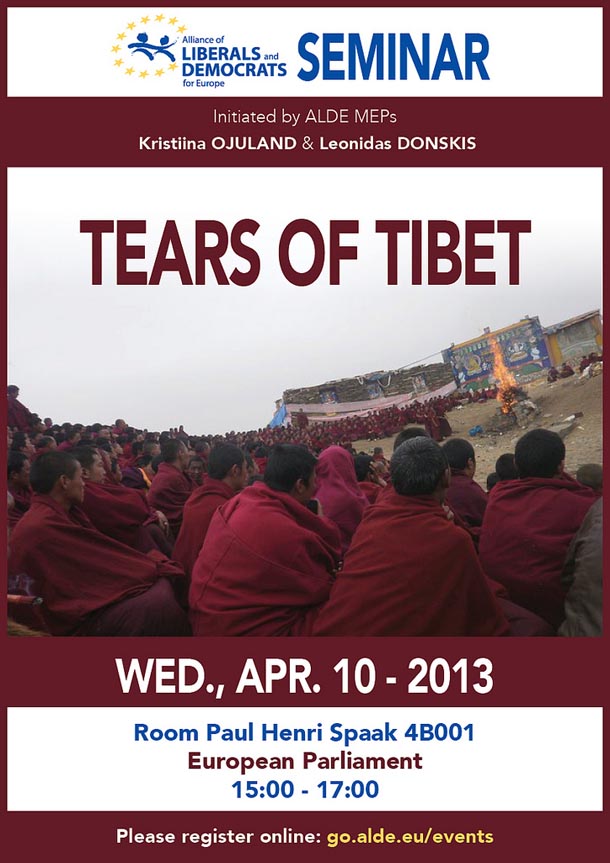 Dharamshala: Members of the European Parliament (MEPs) held a conference titled Tears of Tibet in the Belgian capital Brussels on April 10, to discuss the self-immolation crisis in Tibet, human rights and the environmental issues in the country, and the role of Europe Union.

“We can’t close the eyes on the human tragedy going in Tibet daily in the name of stability,” said MEP Ojuland, of the Alliance of Liberals and Democrates in Europe (ALDE), who organized the conference.

The meeting reviewed European Parliament action for a peaceful solution and discussed how to change its approach and strategy in order to help the Tibetan people.

“The Tibetan monks have won the cause already,” said MEP Leonidas Donskis. “I believe that we have to do our utmost for Tibet. Both China and Russia represent rival civilizations. While we were thinking that [a] free-market economy will lead to political pluralism, today it is obvious that this thinking is naïve.”

The representative of His Holiness the Dalai Lama, Mr Ngodup Dorjee, reminded the conference that Tibet is a source of water to a half of humanity, representing a natural resource of paramount significance to all mankind. The industrialization of Tibet, as promoted by the Chinese Communist Party, represents a real danger to humanity, he said.

Other speakers included Ms Kate Saunders of the International Campaign for Tibet and Mr Roy Strider, an Estonian writer and human rights activists.

“I’m asking the European Parliament to send a fact-finding mission to Tibet”, said Mr Strider, who also underlined that the self-immolation of monks symbolises the ultimate claim over their bodies and souls in the face of Chinese oppression.

ALDE has organized the conference for the past two years and indicated that it would continue to do so into the future.