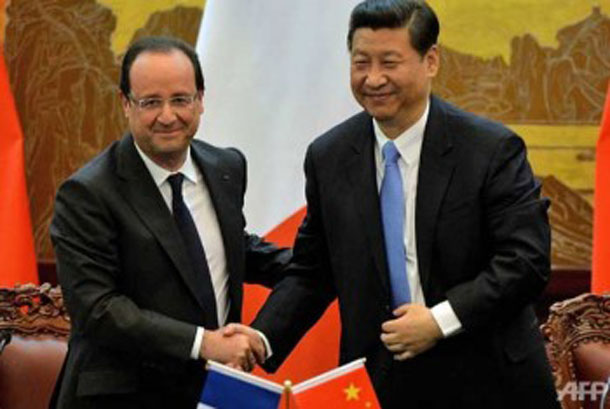 Dharamshala: French President Francois Hollande became the first western leader to meet with China’s new President Xi Jinping on April 25, where Mr Hollande said that his talks touched upon the issue of Tibet; where there has been 117 self-immolations to date.

During a press conference President Hollande said that during his talks with Chinese leaders he raised the issue of Tibet and human rights and that all topics were discussed in a “frank and respectful manner.”

On the issue of the recent self-immolations, President Hollande was recently quoted by Euronews as saying that they “created some legitimate emotion.”

President Hollande said, “Regarding human rights and democratic principles, they are both part of the dialogue that we are having. It should not be seen as an obligation, we should simply put this issue as it should be: as part of frank and respectful political dialogue.”

The most recent self-immolations occurred on April 24, when two young monks from the Taktsang Lhamo Kirti Monastery in Zoege, eastern Tibet- Lobsang Dawa, 20 and Kunchok Woeser, 22 passed away in their fiery protests. They set themselves on fire demanding freedom and the return of exiled Tibetan spiritual leader His Holiness the Dalai Lama.

The Poll, carried out between April 16-18, showed that 94 per cent of the people deemed the present condition of human rights and civil liberties in Tibet as "unsatisfactory." More than 80 percent of the people polled further said that they feel "in solidarity with the Tibetans" and were in favour of the French President meeting with the Dalai Lama if he visits France.

President Holland travelled to the commercial hub of Shanghai before he flew home late on April 26.