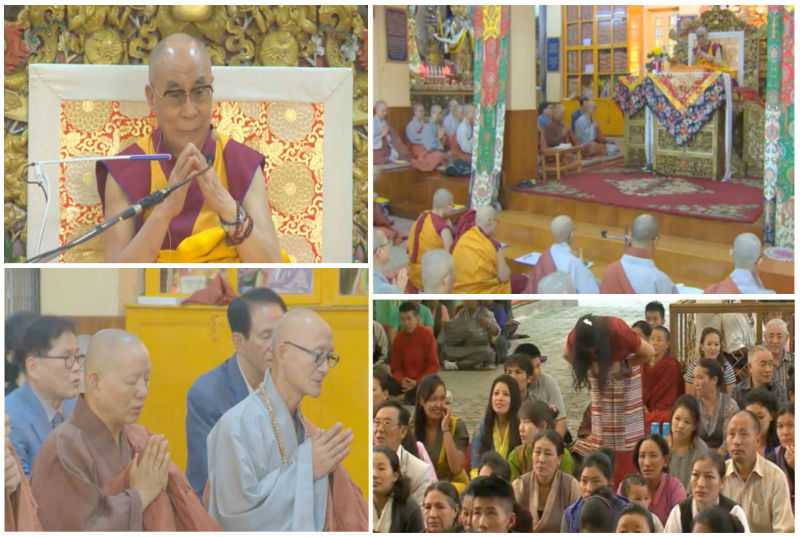 Dharamshala: - After successfully concluding about a month-long meditational retreat in Ladakh, the spiritual leader of Tibet His Holiness the Dalai Lama on Sunday, August 25 commenced a three-day teaching on Tsongkhapa's Concise Treatises on the Stages of the Path to Enlightenment, at the main temple in Dharamshala, India.

Addressing 4700 devotees, including 250 Koreans and international visitors from 61 countries, His Holiness said that positive human values like morality, love and tolerance should be developed to create a lasting peace and happiness in the world, which is troubled by corruption, bullying and discords in the name of religion.

The three-day teaching sessions are held at the request of followers and devotees from Korea.

"The world still faces problems like corruption, hypocrisy and bullying of weak by strong despite introduction of rule of law, democracy and freedom of press," His Holiness the Dalai Lama said in his introductory remarks on the first day of a three-day teaching being given at the request of a group of Koreans.

"Despite making tremendous technological advancement and material development, people still do not have inner happiness and lasting peace in the world. Lack of positive human values breed negative emotions like greed, jealousy and hatred," the Nobel Peace Prize laureate said.

"So the need to develop human values is common for all 7 billion human beings, irrespective of whether they believe or do not believe in religion. All the world's religious traditions teach development and promotion of morality, love, compassion, tolerance, contentment and self-discipline," His Holiness said.

Security has been beefed up at His Holiness the Dalai Lama's residence and Buddhist temple following the serial bomb blasts in Bodh Gaya and terrorists' threat to Tibetan monasteries.

However, earlier devotees of varied nationalities who use to attend the teachings of His Holines use to take FM radios and electronic gadgets with them including translators to hear the sermons in their own mother tongue.

"We have decided not to allow the FM radios and electronic gadgets in the teachings of the Dalai Lama which are going to start from August 25 this month according to the office of the Dalai Lama" said Mohit Chawla, ASP at district police headquarters here.

Only those FM radios provided by the Tibetan Security will be used during prayer or teaching session. Himachal Pradesh Police use to review the security of the Tibetan spiritual leaders and their official palace, besides establishments of the Tibetan Administration based in Dharamshala, India.

"Since the government of India has extended Z-plus category security to the Dalai Lama, we have requested it to look into the feasibility to add chemical detectors to his security too," said Ngodup Dorjee, secretary of Central Tibetan Administration's (CTA) security wing.

The office also said it would provide English translation for all English-listening members of the audience in a designated area.

"We apologize for the inconvenience created and ask for your understanding while we work out a new method for translation services for future teachings," it said.

His Holiness has returned to Dharamshala on Friday morning, August 23 after successfully concluding about a month-long meditational retreat in Ladakh, India's northern state Jammu & Kashmir.