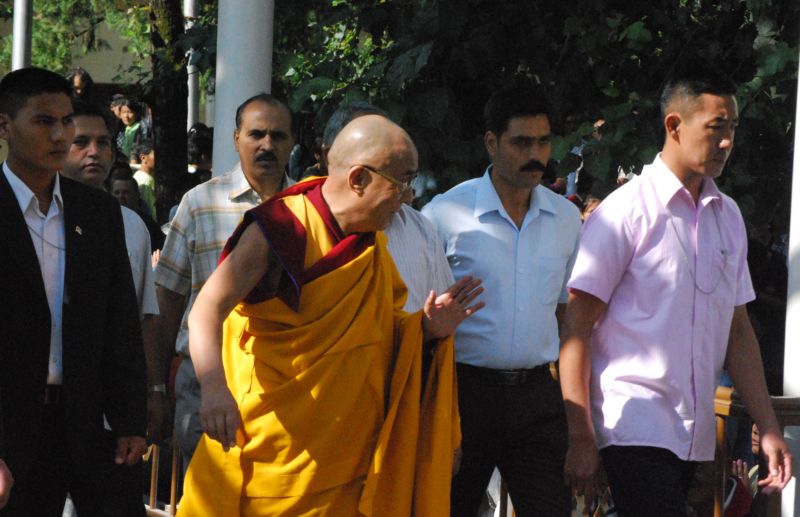 Dharamshala: Tibetan spiritual leader His Holiness the Dalai Lama left Dharamshala today to visit and hold different events in the United States and Canada. His Holiness visit will start with a public talk on Developing Peace and Harmony at the Cannon Center in Memphis, TN, USA on September 23. He will receive the International Freedom Award on the same day at The Peabody hotel in Memphis in the US. Proceeds from the concert will go to the Missing Peace Music and Art Program, His Holiness the Dalai Lama's Foundation. A documentary film crew will be on hand to record the event for a possible television broadcast.

On September 25 and 26 His Holiness will give teachings on The Four Noble Truths and confer the Amitabha Permission Initiation (opakmei jenang) and Medicine Buddha Initiation at the Long Beach Arena, CA, USA. This event is organized by Geden Shoeling Tibetan Manjushri Center of Westminster.

After this, His Holiness will travel to Canada, to attend the Vancouver Peace Summit: Nobel Laureates in Dialogue on September 27 and 29 organized by the Dalai Lama Center for Peace & Education in Vancouver and visit the University of Calgary in Alberta the following days.

His Holiness will give a public talk on Educating the Heart: The Power of Compassion at the Bell Center in Montreal, Quebec on October 3 and will then return to the United States. He will give a afternoon teaching on Nagarjuna's Commentary on Bodhicitta(jangchup semdrel) organized by a Vietnamese group at the Manhattan Center, New York on October 4.

The last three days of his visit, His Holiness will spend in Washington, DC, to participate in a Mind and Life Conference on the theme of Educating World Citizens in the 21st Century and give a half-day morning teaching on The Heart of Change: Finding Wisdom in the Modern World organized by the Conservancy for Tibetan Art and Culture.

His Holiness the Dalai Lamas next teaching in Dharamshala is scheduled for October 15 to 18.