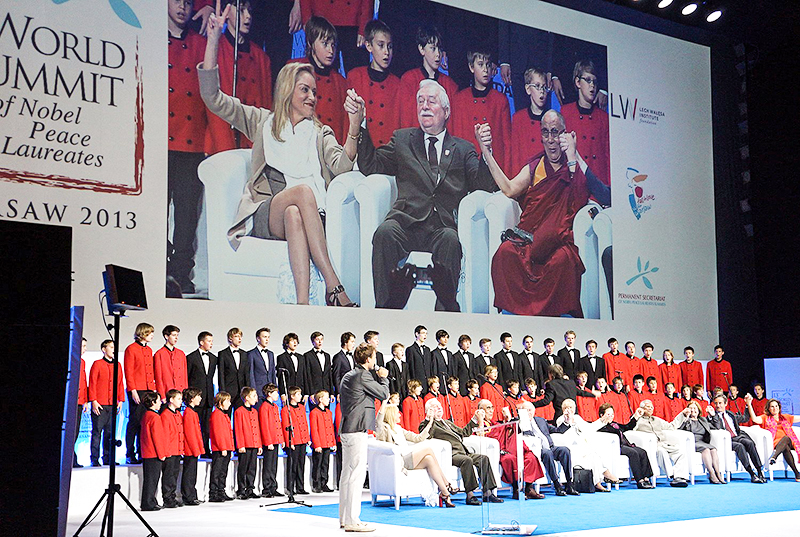 Dharamshala: - Actress Sharon Stone has been honoured with the Nobel Peace Summit Award in Warsaw, the capital and largest city of Poland for her AIDS charity Work.

The spiritual leader of Tibet, His Holiness the Dalai Lama presented actress Sharon Stone with the Nobel Peace Summit Prize on Wednesday for activism against HIV/AIDS, at the end of the three-day event in the capital.

Stone received the award "for her activities that brought solidarity and new hope to the millions of people who have fought and are fighting against the tragedy of HIV/AIDS."

The actress paid tribute to late actress Elizabeth Taylor, who was one of the first in Hollywood to take up the cause in the early 1980s.

Stone said that if it was not for her "friend, the great fighter Elizabeth Taylor, we would still be saying the word AIDs in a whisper, as if it was a secret."

She stressed that AIDs remains a vast challenge across the globe. "A child still dies every minute [from AIDS]," Stone said.

The 55-year-old has worked closely with US charity amFAR - the Foundation for AIDS Research - and also holds the office of campaign chairman for them. "Please, everyone, reach out and show what you're able to do," she implored.

The 13th World Summit of Nobel Peace Laureates was attended by former Peace Prize-winners including His Holiness the Dalai Lama, and Polish laureate Lech Walesa.

The separate Peace Summit Prize has been won in the past by such figures as rock star Bono and actors Sean Penn and George Clooney.