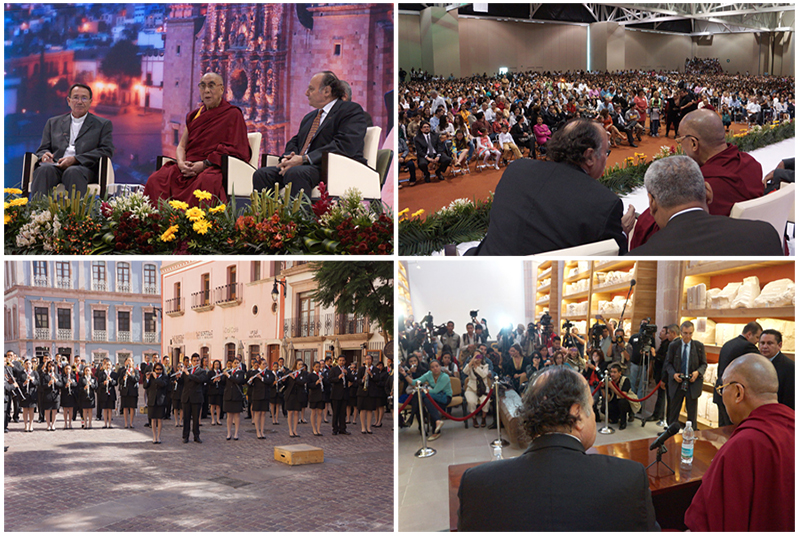 Zacatecas, Mexico, 16 October 2013 – Zacatecas, recognised as a UN World Heritage Site, saw the arrival of the spiritual leader of Tibet His Holiness the Dalai Lama to the Antiguo Templo de San Augustina.

Once a church, it was today the location of an Inter-Religious Dialogue hosted by Monsenor Sigifredo Noriega Barcelo, Bishop of the State of Zacatecas His Holiness arrived to a brass band playing and excited school children lining his path, where the Bishop welcomed him inside.

His Holiness began by saying that he preferred to speak standing up, "so I can see the faces of the people I'm talking to." He said that material development appears to be beautiful, but underneath the problems of injustice, exploitation, corruption and conflict give rise to anxiety and unease.

On the other hand, he added, spirituality is a real source of inner peace, which is derived from the practice of compassion. His Holiness stated that spirituality retains a valuable role in the 21st century, but in order to pursue it we need to be sincere. "The message of spirituality – love, compassion, tolerance, self-discipline and truthfulness should be part of our day to day life. If they are, they will impel real change," he said.

Another point he made was that today we live in a multi-religious world and added that although there are philosophical differences these are just differences of approach to the practice of love and compassion.

"Many of the problems that confront us are our own creation," he said and everyone has the potential to create peace in their own minds.

Everyone in the room then recited a prayer for peace. His Holiness then met the press and re-iterated his commitment to promoting human values, the causes of inner peace, to inter-religious harmony and to the preservation of Tibetan culture (peace and non-violence).

The first question was about creating peace in a country riven by inequality and about the origin of social and economic problems in Mexico. His Holiness said that they must strive for peace and that the education system is oriented towards materialism and lacks any sense of warmheartedness.

During lunch His Holiness spoke of becoming a refugee more than 50 years ago and how on one hand it was sad, but for him personally he was now no longer bound by protocol and formality. He also agreed that all religions should share common practice when it comes to generating love and compassion.

After lunch His Holiness addressed 4200 people at the Zacatecas Convention Centre saying that everywhere he goes he tries to promote values as a source of happiness and tries to foster religious harmony.

He said he believes it is worth working to develop a happy attitude as this will help you keep a calm mind. He also added that mental experiences were more effective than physical ones.

On the subject of prayer His Holiness said that prayer and meditation could be helpful on a personal level, but were not so effective when it came to social change. He added that a materialist lifestyle without any thought for inner values made us not much different from animals.

His Holiness disagreed that ethics should only be based on religion and that there was a need for a code of secular ethics. Warmheartedness leads to inner peace and self-confidence secures a calm mind which in turn leads to a happy life.

His Holiness now leaves for New York after almost a week in Mexico during which he has spoken with 42,000 people.