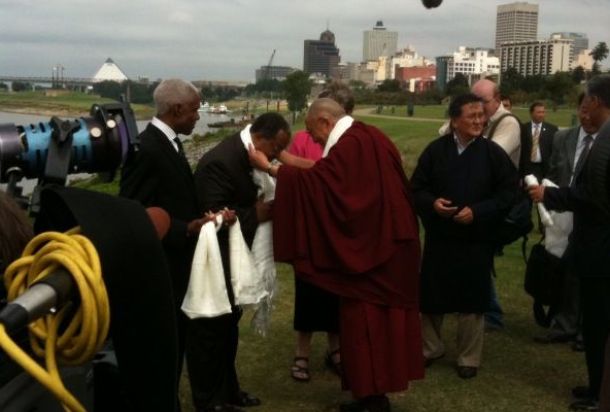 Tibetan spiritual leader His Holiness the Dalai Lama has opened a three-week visit of North America in Memphis where he received today this year's International Freedom Award from the National Civil Rights Museum. His Holiness expressed his belief in "human value" and "human affection," stating that affection and compassion can reach beyond issues of race, economic status, or any other dividers.

On his arrival in Memphis, he was received by members of the Board and officials of the Civil Rights Museum, former Tibetan PM, Tenzin N. Tethong, Telo Rinpoche, and officials of the Dalai Lama Foundation and Missing Peace Project, and Mr. Kunga Tashi of the Office of Tibet.

His Holiness first went to the Tom Lee Park on the Mississippi river front where the Mayor of Memphis City, Myron Lowery, and Mayor of Shelby County, A.C. Wharton, Jr, welcomed him. During the process of offering and receiving Khatas to and from His Holiness, His Holiness told the mayors that this was our tradition. Mayor Lowery then joked and did a fist bump with His Holiness referring to this as "here we also have a tradition -- you ball your first like this," Lowery said as he taught the Tibetan spiritual leader to fist-bump and laughter broke out among the local dignitaries nearby. However, His Holiness the Dalai Lama later voiced discomfort with the fist-bump, saying the greeting invoked thoughts of violence, according to local CBS television affiliate WREG.

The National Civil Rights Museum is housed at the Lorraine Motel, the assassination site of Dr. Martin Luther King Jr. "I never met him, but I admire him very much," His Holiness said. His Holiness shares a key value with Dr. King in his civil rights movement to free Tibet - non-violence.

His Holiness the Dalai Lama is set to travel across the United States and Canada until mid-October, holding a series of talks on spirituality.