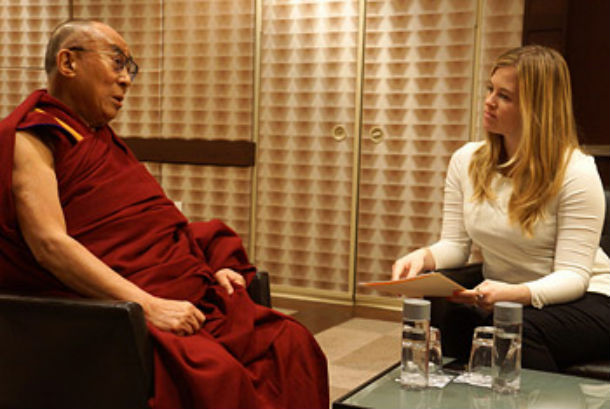 Washington DC, USA, 19 February 2014 - "We are not seeking separation. In 7th, 8th and 9th centuries Tibet was one of three great empires, China, Mongolia and Tibet. But that was in the past and the past has gone," His Holiness the Dalai Lama said, adding that "Yesterday's good food does nothing to satisfy today's hunger."

A respite in the severe wintry weather gripping Dharamshala in recent days on Monday enabled His Holiness the Dalai Lama to take off by plane for Delhi. The Dhauladhar Mountains were brilliant against the clear blue sky. His journey continued on via Frankfurt to the United States.

The final sector saw the Eastern Seaboard swathed in snow and piled snow still lined the streets as he drove into Washington DC. At the hotel he received a traditional welcome from beaming Tibetans led by Sikyong Lobsang Sangay, to the accompaniment of traditional Tibetan musicians.

On Tuesday morning, after several private meetings he gave an interview to Elizabeth Dias of Time magazine. To a question about whether the USA is backing away from addressing human rights issues in its dealings with China, His Holiness declared that democracy, freedom and justice are American principles and fields in which the US continues to give a lead.

He recommended that the free world engages with China, but stands firm on its moral principles. He said that to slacken its resolve about moral principles or a sense of truth would be a great loss. He added that there is a need for all nations to address climate change. Extreme weather is already affecting millions of farmers. He pointed out that the last Copenhagen summit on climate change failed because too many countries put their short term national interests ahead of the global interest. He warned that we have to take scientists' predictions seriously.

About the contribution that social media can make to general well-being, His Holiness said that it depends on how we use them. Concerning his suggestion that the next Dalai Lama could be female and the potential for women in leadership roles, he said that in the past leadership depended on physical prowess leading to male dominance. Today, education has reintroduced a greater sense of equality, but mere education is not sufficient. What is required is education with moral principles and a realistic outlook.

"The time has come for women to take a greater role in promoting human affection, an area in which they are already more skilled."

A question about the self-immolations taking place in Tibet prompted His Holiness to repeat what he has said before, that they are very sad, that we must take care of life and that there were earlier precedents for such behaviour during the Vietnam War and the Cultural Revolution. He reiterated that, since the issue is very sensitive and whatever he says may be manipulated by others, he prefers not to say much about it. He commended improving relations between India and China, which leading to greater development would benefit their respective peoples. He also looked forward to stronger support for the Tibetan cause.

"We are not seeking separation. In 7th, 8th and 9th centuries Tibet was one of three great empires, China, Mongolia and Tibet. But that was in the past and the past has gone. Yesterday's good food does nothing to satisfy today's hunger. Today, Tibet needs development so can benefit from the People's Republic of China. The Chinese constitution provides for the rights of so-called minorities, and in the 50s Mao Zedong told me repeatedly that China did not consider Tibet in the same way it viewed other minority regions."

Regarding the new Chinese President Xi Jinping His Holiness said that many informed Chinese friends had told him that he seems to be more realistic. The courageous way he is tackling corruption is consistent with this. His impression of Xi Jinping's father Xi Zhongxun, who he met in China, was of a good man. There are also signs of Xi Jinping's respect for Hu Yaobang, who took a realistic approach, relied on trusted sources for his information and on a visit to Lhasa acknowledged that mistakes had been made.

"I'm a human being, a citizen of a world in which we are all dependent on each other, a world in which we need more sense of concern for the welfare of others. Sharing this idea with others is one of my commitments. Another is the promotion of inter-religious harmony. So, wherever I go I like to meet members of the public. If I meet with leaders, well and good, but engaging with the public is what is most important."

Asked how he had met Arthur Brooks, the President of the American Enterprise Institute, His Holiness recalled that he had come to Dharamsala to see him and invite him to the Insitute. He said:

"He made a good impression on me and I accepted his invitation. Some people have complained that the American Enterprise Institute is a right-wing organization, but as far as I am concerned right-wingers and left-wingers are first of all human beings. To bring about change in society we need education and we need to consider the oneness of humanity. Therefore, as a leader of the free world, America should take account of the welfare of the whole world."

Rose asked about the role of politics in happiness and His Holiness said that politics is about creating the conditions for happiness. He said that unlike robots we have feelings of pleasure and pain that need to be addressed in a human way. He mentioned that without desire there would be no progress, but that greed is different. Where capitalism focuses on the creation of wealth, Marx's approach focussed on equal distribution. Either way, no one wants everyone to remain poor.

His Holiness was invited to a private luncheon with members and guests of the American Enterprise Institute at which he as made warmly welcome. This was followed by a discussion of 'Happiness, Free Enterprise and Human Flourishing'. Arthur Brooks opened by asking His Holiness how he defined happiness. He replied:

"If you only think of happiness as pleasure, it's very limited. For example, sometimes even suffering can bring satisfaction. That satisfaction can lead to inner peace and inner peace gives rise to a calm mind. We experience happiness and live a happy life not only on a physical level, but on an emotional and mental level too. When a doctor recommends that we relax, he or she doesn't just mean we should physically relax but that we should also mentally relax; this means we need a calm mind.

"Our modern education tends to be a materialistic system. What we need is modern education that includes a sense of ethics. And as India shows by example, in a multi-religious, multi-cultural society, because ethics based on this or that religion would tend to be biased, ethics today should have a secular basis. And by secular I don't mean to dismiss religion, but to express non-partisan respect for all religions and even those people who have none. Such a secularism is also backed by scientific findings. These reveal that self-centredness, which is limiting and confining, does us no good, whereas warm-heartedness, concern for others, is opening and expansive, conducive to inner peace and greater well-being. We need to consider our equality as human beings."

Questions from the floor included who His Holiness considers his heroes. He mentioned Mahatma Gandhi and Martin Luther King for their achievements through non-violence and among people he has actually met, Vaclav Havel and Pope John Paul II. Asked what books have most moved him, His Holiness explained about his Buddhist education and its origins in Buddhist scriptures and commentaries belonging to the tradition of the Nalanda University that flourished in North India. He spoke of memorizing root texts, studying the explanatory commentaries and debating what had been learned with others.

Answering questions from students and potential future leaders in a subsequent meeting, His Holiness referred again to happiness in relation to satisfaction.

"Satisfaction gives rise to inner strength and confidence. We are social animals, we need friends. Friendship depends on trust and trust comes from genuine respect and affection for each other while conducting ourselves truthfully and honestly."

Regarding anger and how to deal with it, His Holiness said it depends on the degree to which you have a calm mind. It is possible for destructive emotions like anger to come and go without disturbing your fundamentally calm mind. He also suggested that it is possible to observe your anger from one corner of your mind and assess whether it really has any value.

As to whether the global economic crisis has brought about a greater sense of responsibility, His Holiness said that the reality is that we now have a global economy. Like it or not we have to approach it with a sense of global responsibility. He repeated that in a similar way, preservation of the environment and dealing with global climate change require that we put the global interest before local or national interest.

Arthur Brooks brought the meeting to an end with expressions of thanks and a summary for the audience of what His Holiness had said:

"We are equal as members of the 7 billion human beings alive today. We should keep an open heart, open to others who are different from us. The principle of global brotherhood and sisterhood is in your hands."