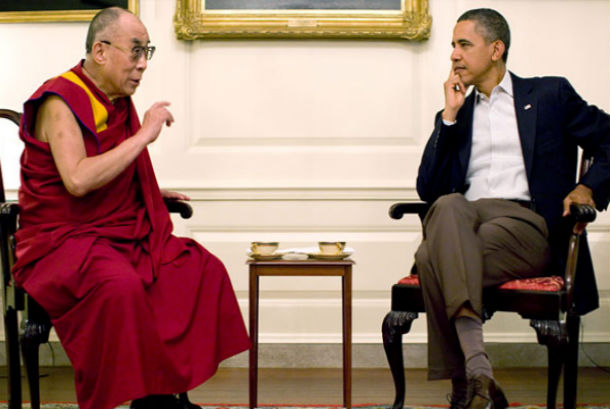 Dharamshala: - US President Barack Obama will meet the spiritual leader of Tibet, His Holiness the 14th Dalai Lama, a fellow Nobel peace laureate, at the White House Friday.

"The President will meet the Dalai Lama in his capacity as an internationally respected religious and cultural leader," National Security Council spokesperson Caitlin Hayden said.

Hayden said the United States supported the Dalai Lama's "middle way" approach of neither assimilation nor independence for Tibetans but recognised Tibet to be "a part of China".

"We do not support Tibetan independence," Hayden said, adding that the US strongly supports human rights and religious freedom in China.

"We are concerned about continuing tensions and the deteriorating human rights situation in Tibetan areas of China. We will continue to urge the Chinese government to resume dialogue with the Dalai Lama or his representatives, without preconditions, as a means to reduce tensions," Hayden said.

The Nobel peace prize winner, who is on a two-week tour of the US west coast, Thursday told a Washington audience that he is warming to capitalism.

"Now after listening to the presenters today, I developed more respect about capitalism. Otherwise, my impression is capitalism only take the money, then exploitation," His Holiness the Dalai Lama said at a panel discussion at the American Enterprise Institute (AEI).