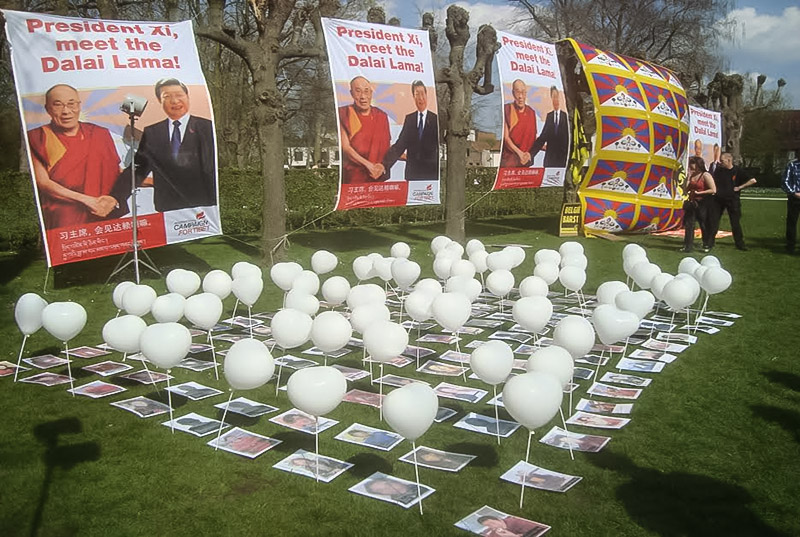 Beernem (Belgium), 3rd April 2014: - At the occasion of the visit of the Chinese President Xi Jinping last Tuesday in Bruges, Lungta Association Belgium and International Campaign for Tibet organized a peaceful action for Tibet and respect for human rights in the afternoon. However, before the protest began more than 20 people in total were administratively detained, mostly Tibetans but also three Belgians, board members of "Vrienden van Tibet" (Friends of Tibet).

All the Tibetans were detained because they are Tibetan, and were prevented from going to the protest. This raises many questions. If the police believe that there would be a threat or a breach of public order, someone can be administratively detained in Belgium for max. 24 hours. Apparently, even being Tibetan seemed to be a threat.

Jigmey Tenzin, 47: "I live and work in Bruges. I had permission from my employer to join the peaceful protest in the afternoon. The organizers had official permission to protest. Shortly after 1.30 pm I was walking with my friend towards Minnewaterpark. In the center of the city, near Eiermarkt close to the Market, the police stopped us. My friend had a Tibetan flag in his pocket. We knew that there was only authorization to protest at Minnewaterpark so all the time he kept the flag in his pocket. The polices asked where we were going, and we answered to the peaceful action for Tibet for which the Tibet groups had the official permission."

"We had to show our papers, our ID, then we were promptly arrested, and had to sit in the police van as they drove us to the police station where we were kept until 4 pm. We were not alone there, there were several other Tibetans and even a few Belgians. We have no idea what we did wrong and we don't understand this at all," he said.

Yeshi Wagma: "At 1.30 pm, my wife and I quietly walked from our home in Ezelstraat to Minnewaterpark. On the way we met a policeman. He asked us if we were Tibetans and we proudly said 'yes we are Tibetans'. Then we had to show our papers. Shortly after they said 'you are administratively detained'. In my backpack I had the Tibetan flag and the flag of Belgium, my host country where I live now.

We were taken to the police car where another Tibetan was sitting. At the police station several other Tibetans were there too, and they had experienced the same as us. I'm truly shocked, we didn't violate any rule and we didn't do anything wrong, as residents of Bruges we were just on the way to the protest, that's all," he said.

"You often hear politicians saying how important human values are, the right of free speech and the right to freedom of movement, and the importance of rights and democracy, but in practice, yesterday we were arrested without any reason, simply because we are Tibetans. We were only released after the protest. I come from Tibet, but I now live in Bruges and it felt uncomfortable to not be able to go where I want and to be detained for nothing. I still keep hoping for peace and that everyone may live happily and with dignity," he stressed.

Not only Tibetans who were on their way to the protest were arrested. A lawyer from Bruges informed us that some Tibetan clients of hers on their way to her office (outside the center of the city) were also arrested and they missed their appointment.

From a reliable source, we learnt that before the visit of Xi Jinping, all facades of the houses on the route where the Chinese president would pass, were checked because nothing could refer to Tibet, such as a Tibetan flag in front of a window or a picture of H.H. the Dalai Lama. In Tibet, the Tibetan flag and a picture of the Dalai Lama are also strictly prohibited. Tibetans who are in possession of the flag or such photographs are put in prison for seven or more years.

Last Tuesday, there were more than 400 policeman in Bruges. Chinese security forces were obviously present and had very strict measures. There were even snipers stationed on the roof of the Concertgebouw, where the Chinese President would be received. This is similar to the Barkhor Square in Lhasa, where Chinese soldiers and snipers are on the rooftops around the square.

Tibetaanse-Vlaamse Vriendenkring (Tibetan-Flemish Circle of Friends), expressed her dismay and disgust from such practices which apparently Chinese standards are maintained and the law is dictated from Beijing. Bruges was a city under siege last Tuesday. The capital of West Flanders was a little bit like the capital of Tibet, where for decades there has been a massive Chinese military presence. The city of Lhasa is full of cameras and there are very strict controls, limited freedom of movement for Tibetans, regular checks, intimidations by the Chinese authorities and arbitrary arrests.

The protest in the Minnewaterpark was allowed only after the Chinese president had left the city. From 1.30 pm, about 120 Tibetans and Tibet supporters gathered. The Tibetan national anthem was sung, which is prohibited in Tibet itself, and there were speeches by the Chinese dissident Mona Zhimin Tang (former Tian An Men student in 1989), Vincent Metten of the International Campaign for Tibet, Peter De Roo of the political party N- VA (county councilor of West Flanders) and Dennis Barbion (president of Tibetan-Flemish Circle of Friends).

During the serene ceremony, all the names were called of the 130 Tibetans who have self immolated since 2009, to protest against the Chinese oppression. One by one, their pictures were shown and laid on the grass, with white balloons in between. In this way a small Tibetan graveyard arose "in Flanders fields". Afterwards there was a peaceful protest march through the center of the city. Slogans like "What we want? We want freedom", "Long live the Dalai Lama" and "China is lying , Tibet is dying" were shouted.