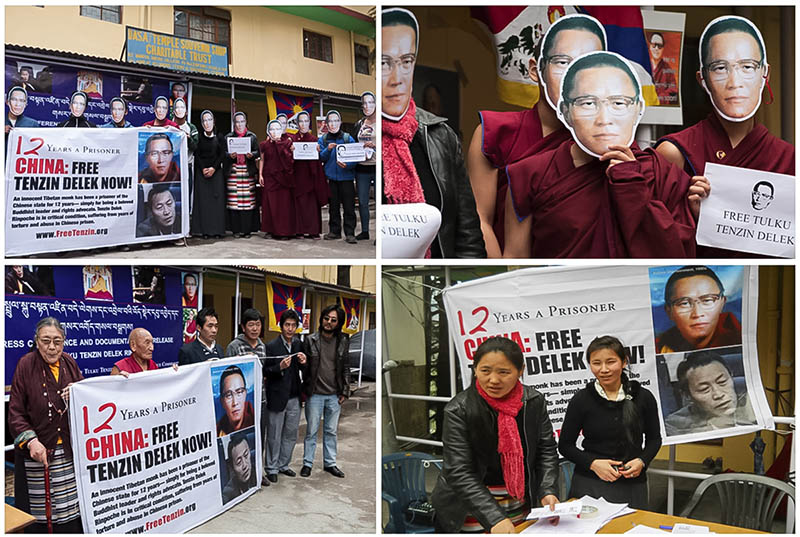 Tenzin Delek Rinpoche was charged with "causing explosions" and "inciting separatism", charges for which no evidence has ever been provided and he has steadfastly maintained his innocence. His original trial (December 2002) was not held in accordance with international fair trial standards and he was denied the right to be represented by lawyers hired by his family. His second hearing (January 2003) was held in secret without due process. Rinpoche was given a suspended death sentence which was later commuted to a life sentence.

'There are some people who say that taking up my case will make things worse for me. At this point, I have fallen to the lowest point. Nothing worse can come. So, you can make appeals and initiate campaigns for me.' - Tenzin Delek Rinpoche's recent message from prison

"Today, on the Global Day of Action for the Release of Tenzin Delek Rinpoche, Tibet campaigners and supporters are coming together with his family and students across the world to create the public attention this campaign deserves. Today is a one-day global action call, and this is an ongoing campaign that we will work on over the year," said Dorjee Tseten, Asia Director of Students for a Free Tibet-India.

Tenzin Delek Rinpoche has been wrongly imprisoned. His "crime" has been to devote his life to helping his community, working tirelessly to preserve the Tibetan identity, culture and Tibet's environment. He has been persecuted for his support for the Dalai Lama, his promotion of Tibetan Buddhism and for his cultural and social development work in Tibet.

In Dharamshala, Students for a Free Tibet-India together with students of Tenzin Delek Rinpoche are organizing a photo action at the Main Temple where 30 nuns from Dolmaling nunnery are also sitting on a day-long hunger strike, followed by an evening talk and video screening at the TCV Day School, Mcleod Ganj.

Similar events are being organized by Students for a Free Tibet chapters and Tibet groups in major cities around the world, including Delhi, Paris, New York, Warsaw, Vienna, Zurich, Brussels, and Toronto.