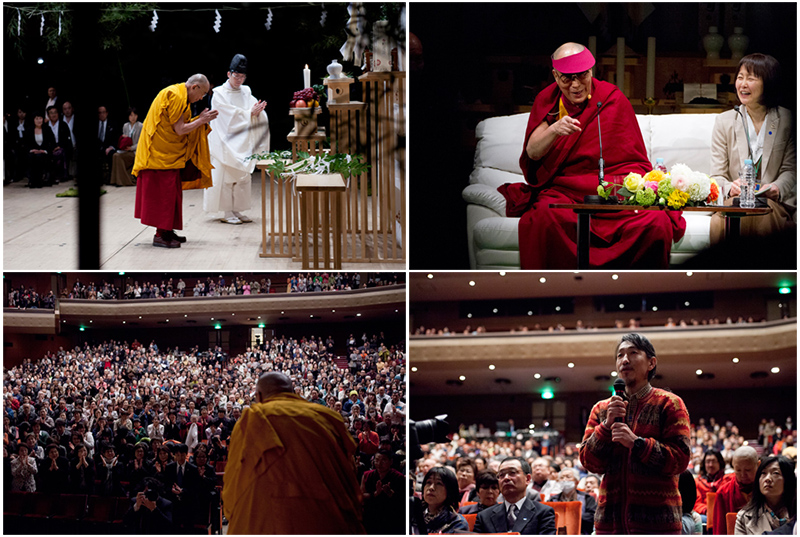 Sendai, Japan, 7 April 2014 - Following his arrival in Japan from India April 7, His Holiness the Dalai Lama today flew from Narita to Sendai. His Holiness was introduced by Ms Kawakami Hiroko, herself a Shinto priest, extolling his tireless work for peace and dialogue in the world. There followed an extensive Shinto ceremony with prayers, offerings and purification rituals.

"Today, it's a little more than three years since the most powerful earthquake to hit Japan and the consequent tsunami that caused extensive devastation followed by radiation problems," His Holiness began. "Many people died, many lost their homes; there's been widespread grief and sadness. The purification rituals the Shinto priests have performed today are intended to help. I have great respect for all religions because of their intention to help, because they bring people solace."

"The Indian Buddhist master Nagarjuna says that if you allow yourself to remain depressed you won't be able to overcome the problems that confront you. Therefore it's important to keep up your spirits and remain confident that you can do what you set out to do."

He offered his condolences and sympathy to those directly affected by the quake and tsunami and urged them not to feel depressed but to have self-confidence, determination and a firm resolve. "If tragedy strikes, don't lose hope. Transform it into an opportunity to make things better." He suggested that it is very sad to lose family and friends, but if we imagine that they can see us from heaven, or wherever they are, to see their loved ones dismayed and downhearted will only fill them with sadness too. To see us optimistic and full of hope will make them happy.

His Holiness recalled Tibetan refugees who were given land to live on in a hot part of India and complaining that they would die from the heat. On a later visit he teased them that they had survived after urging them to stay in the shade during the hottest part of the day.

He remarked on the care Japanese take over so much that they do. While making use of modern science and technology Japan still held strong spiritual traditions in Shintoism and Buddhism and concluded that too much solemnity and an artificial smile risks a move towards hypocrisy.

Answering questions from the audience he advised that it is always helpful to remain honest and truthful in the face of difficulty. "You should examine whether what you want to do is really feasible. Research your goal and adopt a realistic approach. Hope for the best, but prepare for the worst. Be honest, truthful and concerned for the well-being of others. To be self-centred instead leads to fear and suspicion, which more often than not ends in loneliness."

About prayer he said it makes sense in traditions that believe in a creator to pray to god. From the Buddhist point of view, however, the Heart Sutra, for example, is not so much a prayer as a description of reality.

Asked what has made him happy, His Holiness replied: "To be a bhikshu, a Buddhist monk, and to be a follower of the Nalanda tradition. When I reach a new understanding of something I'm reading it brings me great satisfaction. Thinking about the awakening mind of bodhichitta and emptiness brings me a real sense of joy."

He concluded by reciting his favourite verse from Shantideva's 'Guide to the Bodhisattva's Way of Life':

'For as long as space endures
And for as long as living beings remain,
Until then may I too abide
To dispel the misery of the world.'