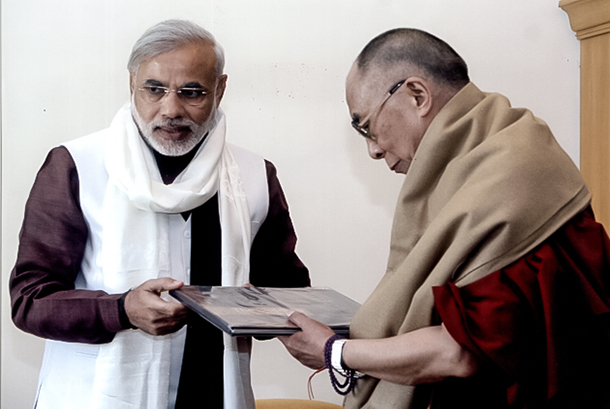 Dharamshala: - The spiritual leader of Tibet His Holiness the Dalai Lama on Saturday [17 May 2014] congratulated Shri Narendra Modi on his party's decisive victory in the national elections and said India was the 'world's largest democratic nation' with 'a deep tradition of Ahimsa.'

In a letter to the Prime Minister-elect, His Holiness the Dalai Lama stated that India was the world's largest democratic nation and the most stable country in South Asia with a deep tradition of Ahimsa. He said that he took pride in citing India as a living example of unity in diversity, an ancient country in which all the major world's religious traditions flourish and from which other countries could learn.

His Holiness wrote that just as he had brought development and prosperity to Gujarat, under his leadership India would continue to flourish and prosper. His Holiness wished him every success in meeting the many challenges that lay ahead and in fulfilling the hopes and aspirations of the people of this great nation.

In September 2013, a Tibetan delegation visited Gujarat State and urged Shri Narendra Modi to raise the issue of Tibet and render his support for early resolution of the Tibet crisis. The delegation briefed him about the ongoing crisis in Tibet especially the unprecedented spate of self-immolations as a result of Chinese repression.

In response, Shri Modi assured them of his strong 'solidarity' with Tibetan people and 'vowed to do his utmost in future.'

Shri Modi told the delegation to foward his heartfelt greetings to His Holiness the Dalai Lama.

As Gujarat Chief Minister Shri Modi met His Holiness the Dalai Lama at the International Buddhist Heritage Seminar at Baroda in January 2010. He said that a centre for religion studies will be started at M S University.

He also announced that a Buddhist temple will be constructed in the state. 'This will not just be a place of worship or a revenue generation exercise to attract tourists, but also be developed as a centre of research on Buddhist philosophy,' he added.