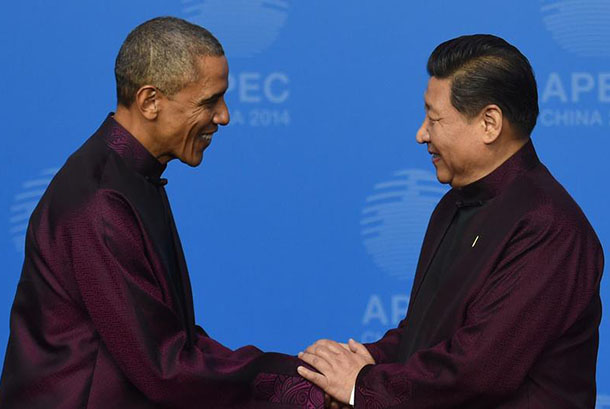 Dharamshala: - Speaking in Beijing shortly after announcing the US and China had reached a deal to curb greenhouse gases President Obama said on Wednesday, "we recognise Tibet as part of the People's Republic of China."

‘We are not in favor of independence. But we did encourage Chinese authorities to take steps to preserve the unique cultural, religious and linguistic identity of the Tibetan people,' President Obama said at a joint news conference at the Great Hall of the People in Beijing.

President Obama also said he and President Xi ‘had a very healthy exchange around these issues,’ and he told the Chinese head that ‘it is so important for us to speak out for the freedoms that we believe are universal, rights that we believe are the birthright of all men and women, wherever they live, whether it is in New York or Paris or Hong Kong.’

‘We think history shows that nations that uphold these rights – including for ethnic and religious minorities – are ultimately more prosperous, more successful, and more able to achieve the dreams of their people,’ he added.

President Obama and Chinese President Xi Jinping praised their landmark joint plan to curb carbon emissions, which includes targets for reduction of emissions in the United States and an ambitious first-time commitment by China to stop its emissions growing by 2030. Also highlighted were agreements on cyber security, trade and regional security.

Speaking on cooperation between the two nations Obama said, "When the US and China are able to work together effectively, the whole world benefits."

On the subject of human rights, Xi, who spoke through a translator, said China has made progress on human rights but said there was always room for improvement. Obama highlighted America's strong support for human rights of all people but said the US does not favour Tibetan independence from China.

This is not the first time Obama has said the US does not support Tibetan independence. On 21 February 2014, President Obama met with His Holiness the Dalai Lama in Washington DC, despite objections from China. According to a statement from the White House, Obama reiterated that the US position is that Tibet is part of the People's Republic of China and the United States does not support Tibet independence.

Obama stressed that he encourages direct dialogue to resolve long-standing differences and that a dialogue that gets results for China and Tibetans would be positive.

His Holiness the Dalai Lama told Obama in February that he is not seeking independence for Tibet and hopes that dialogue between his representatives and the Chinese government will resume. Both agreed on the importance of a positive and constructive relationship between the United States and China.

When asked on Wednesday about sanctions to foreign journalists, the Chinese President defended China's position and said that journalists should obey China's laws and regulations. In recent years reporters from New York Times, Reuters and Al Jazeera are just a few who have encountered problems in obtaining permission to report in China.