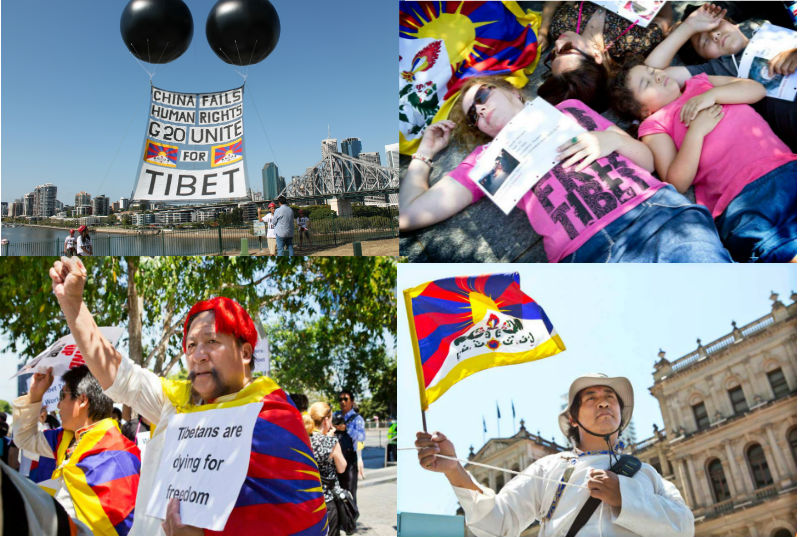 The protests are led by Australia Tibet Council (ATC), Students for a Free Tibet (SFT), and other locally based Tibetan community associations. In an appeal to join the rally on ATC’s website it said: “Tibetans and supporters in Australia and worldwide are calling on key world governments to take joint action to address the human rights crisis in Tibet.”

“Tibetans and supporters shone the spotlight on China’s failed human rights record and called on world leaders for a new, coordinated action on the crisis in Tibet.”

G20 summit is the meeting of wealthiest countries in the world where the leaders gather to discuss wide range of global economic issues and to use their collective power to tackle key issues confronting the planet.

On November 14, the Tibet support groups held a banner floated in the air by two giant balloons which read ‘G20 unite for Tibet.’ This protest is held at iconic Story Bridge which is close to the hotel where Xi Xinping is staying during the summit.

On the following day on November 15, Tibetans and its supporters staged a mock die-in protest “in solidarity with those who have sacrificed their lives for freedom in Tibet” at a major intersection in the city of Brisbane that was used by the world leaders as the commute for the two-day summit.

“Economic growth, the key agenda at the G20 Summit, can be a force for good but only when combined with policies that are consistent with human rights. China remains an authoritarian state that continues to oppress Tibetans. Like-minded governments must stand by their shared democratic values and put collective pressure on China to end the suffering in Tibet.” said Kyinzom Dhongdue, Campaigns Manager of Australia Tibet Council.

The deputy director of the New York based Students for a Free Tibet and the director of its India office is now touring Australia and was also present at the protests.

Pema Yoko, the Deputy Director of Students of Free Tibet said: “Joint G8 government pressure on Russia forced Vladimir Putin to roll back repressive policies in Ukraine. G20 leaders can apply similar multilateral pressure on China to help end the crisis in Tibet. The only way China will change its violent course in Tibet is if global leaders, like those gathered here in Brisbane stand up for human dignity and hold China accountable for its abuses in Tibet.”