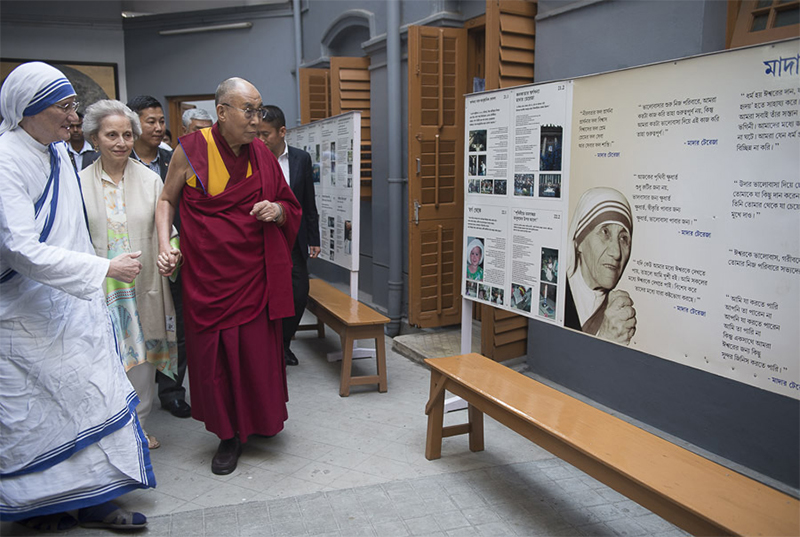 Dharamshala: - Being an admirer of Mother Theresa, His Holiness the Dalai Lama said that it was his duty to pay tribute to the Roman Catholic religious sister who dedicated herself sincerely to the poor people.

His Holiness was warmly received by the Superior General of the Order, Sister Mary Prema Pierick at the headquarters of the Missionaries of Charity in Kolkata, the capital of the Indian state of West Bengal where Mother Teresa, a Roman Catholic religious sister and missionary lived for most of her life.

Everyone present expressed pleasure at his spontaneous visit with laughter and applause at the headquarters of the Missionaries of Charity in the city, on January 12, 2015. His Holiness spoke admiringly of the way the Sisters serve humanity, particularly by caring for the poorest of the poor.

In her address the Sister Mary Prema Pierick recalled His Holiness the Dalai Lama's previous visit in September 2005. "What a joy it is to have His Holiness amongst us once more in the Mother House," she remarked.

She said to them that what the world needs more than ever is peace and quoted Mother Teresa as saying; "Peace begins with a smile."

In his welcoming remarks, the Archbishop of Kolkata mentioned how providential was His Holiness's visit to the Missionaries of Charity, calling it a true gift for Christmas and the New Year. "And yet peace is not something we celebrate only because of the season. His Holiness is a perpetual apostle of peace."

He went on to say that in a world torn by war owing to people's greed and mistrust, simply to see His Holiness's smiling face is to know that peace is possible. He thanked His Holiness "for bringing your peace to us."

In his address, His Holiness urged the gathering to continue serving people, especially the poor and needy in that spirit. He asked all those present to consider that they were working for the entire family of 7 billion human beings with the aim of making this 21st century an era of peace.

He also recalled the one brief occasion on which he met Mother Teresa, describing her as an exemplary person, who revealed to others the true practice of love through her charitable activities. He said that although she is no longer physically among us, her spirit lives on as does the spirit of Jesus Christ and Buddha Shakyamuni.

Reiterating his admiration of their work His Holiness said that "it is important that you keep up your humanitarian service. I often point out to other people how Christian brothers and sisters have made the greatest contribution to humanity in terms of education and health."

"Mother Teresa dedicated herself sincerely to the poor. As an admirer it is my duty to pay tribute to her. She was practical in her prayers, actually putting them into action by taking care of the poor," His Holiness added.

His Holiness reiterated his own commitments to promoting human values and inter-religious harmony. He also reminded his listeners that, although those who like him belong to the older generation will inevitably disappear, the younger generation must keep up the good work and set an example for generations to come.

"Please continue to dedicate your lives to the service of humanity, particularly the poor," His Holiness expressed.

The Superior General then escorted His Holiness to Mother Teresa's sparsely furnished room, where he again paid his respects. Before departing the Mother House for his hotel, His Holiness greeted well-wishers waiting to catch a glimpse of him and answered a waiting journalist's questions.