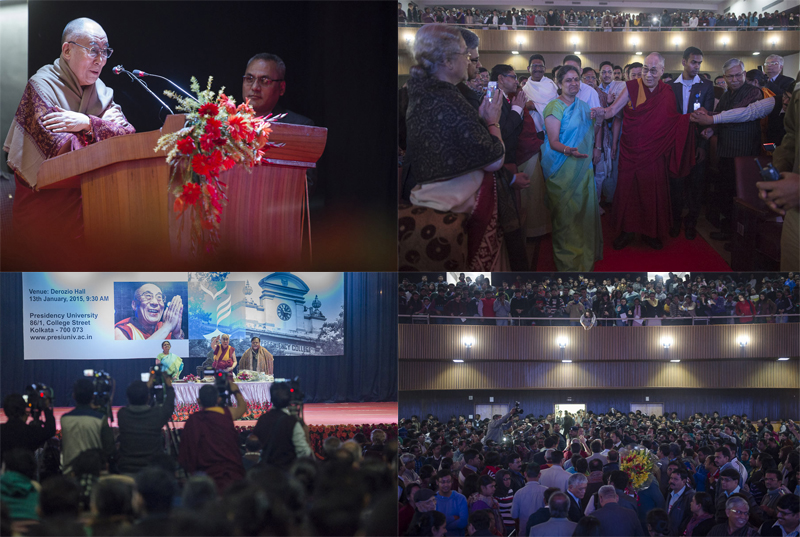 Kolkata, West Bengal, India, 13 January 2015 - The spiritual leader of Tibet His Holiness the Dalai Lama Tuesday said that we must find ways of resolving conflicts and problems that are "peaceful and not destructive."

His Holiness the Dalai Lama spoke on "A Human Approach to World Peace" to the Presidency University, a public state university located in Kolkata, West Bengal, East India.

The Vice Chancellor offered both guests a bouquet of flowers, and a traditional shawl before introducing His Holiness to the faculty, students and other guests in the audience.

She described His Holiness as being extraordinarily human while at the same time an evident embodiment of wisdom and compassion. “We have an epitome of peace amongst us today," she remarked.

The Tibetan spiritual leader mentioned that as he was on his way to the University on Tuesday morning he was thinking about what he might say about ‘A Human Approach to World Peace’. It struck him that thousands of years ago human beings must have had various ways of solving problems and conflicts among themselves.

'Then they developed weapons, beginning perhaps with knives and arrows. This trend has culminated today in weapons of immense destructive potential,' His Holiness said, adding that 'they were developed by scientists with the finest brains and the highest education, which, while it may not have been their intention, is focussed on refining the means to kill."

“We must change this inclination to resort to the use of force, employing weapons, to solve problems. Differences are bound to arise between us, but we must find ways of resolving them that are peaceful and not destructive," His Holiness said.

"By implementing ahimsa, non-violence, we have the opportunity to avoid violence and develop a more human approach to resolving conflicts peacefully,” His Holiness continued.

He said that while the core of his talk might be the ancient concept of "Ahimsa", it remains keenly relevant today and there is something appropriate about an elderly person, nearly eighty years old, speaking about something ancient at this oldest of universities.

“I am one of you,” he continued. “Mentally, emotionally and physically we are the same. We all wish to live a happy life. In addition, we all have the same right to fulfil this goal," His Holiness said.

The spiritual leader said that "we all have the potential to do so for the simple reason that the future is not fixed, it can be changed. Therefore, we should live in hope that we really can overcome whatever problems we face.”

His Holiness explained that hope is fundamental to our lives. When we lose hope it can shorten our lives and in the worst case induce us to commit suicide, which is a terrible outcome.

He suggested that when we face problems we should assess the situation from a wider perspective, because there is always a hopeful aspect to be found, no matter how desperate things may seem.

He remarked that even religion is intended to make us happy. Nobody is religious in order to be miserable.

In the warm conditions that prevailed on the stage, His Holiness reached for the ceremonial shawl he had been offered earlier to mop his brow, observing to the audience:

“I have no interest in formality!” His Holiness said, adding: “Because we are social animals, we need affection. This begins with the unconditional love of the mother-child relationship. When there is love and respect between us it naturally reduces the suspicion that ruins our peace of mind."

"Today, psychologists and other scientists confirm this. They have found that constant fear and anxiety destroys our immune system. As the Vice Chancellor told you earlier, this old person studied Buddhist philosophy back in Tibet, but becoming a refugee has given me the opportunity to hold discussions with scientists over the last thirty years and more."

"As a result we have learned that if we can combine traditional values with scientific findings it can be of great benefit to humanity at large,” he added.

His Holiness observed that to address the moral crises the world faces today, we cannot rely on religious tradition alone because this will not appeal to all 7 billion people alive today. We need instead an approach to moral values that appeals to believers and non-believers alike.

“For example, a religious approach to ethical values is not suitable in a secular education system. Therefore, what we need today is to adopt an approach akin to India's more than three thousand year tradition of secular practice that views those with religious faith and those with none with equal respect,” he further said.