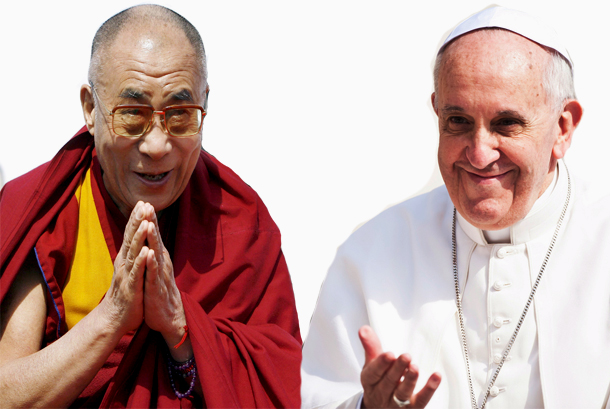 "The usual protocol of the secretary of state is not to receive heads of state and high ranking personalities when they are in Rome for an international meeting," he told journalists as he flew back from Manila.

His Holiness the Dalai Lama was in Rome last month for a summit of Nobel Peace Prize recipients.

"When there were FAO meetings [the Food and Agriculture Organization summit in November], I did not meet anyone," the pope said.

"Some newspapers said that I did not meet with him out of fear of China. This is not true. He asked for an audience some time ago. A date has been fixed. But not for the moment. We are in contact," he added.

Asked about efforts to forge closer ties between the Vatican and China, he said: "The Chinese are polite, and we are also polite. We are doing things step by step."

The Chinese "know that I am ready to go there [China] or to receive [Chinese officials] at the Vatican," he said.

As his plane returned to the Vatican from Manila, the pontiff sent a telegram to Chinese President Xi Jinping, as he does for each country he flies over.

"I assure you of my prayers for you and the people of China, invoking abundant blessings of harmony and prosperity."

In December, reports said the Vatican decision reflected concern over what would inevitably be a furious Chinese reaction, and a desire not to jeopardise efforts to build bridges with Beijing or risk retaliation against the country's small Catholic community.

According to media reports, "the Vatican has not had diplomatic relations with China since they were broken off by Chairman Mao in 1951."