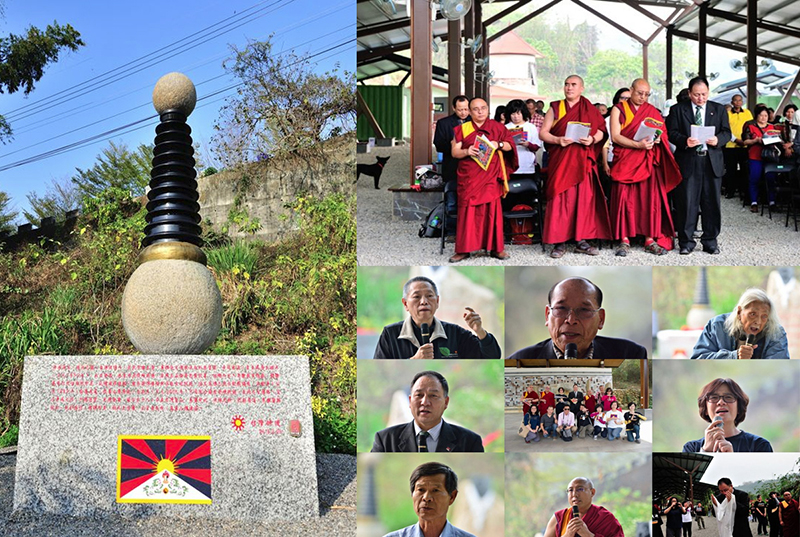 Dharamshala – As people around the world commemorated Tibetan Uprising Day and showed their solidarity with Tibetans, the Tibetan Uprising Tower and Martyrs Memorial opening was held in Caotun, Nantou at the center of Taiwan on March 14, 2015.

The tower was built to memorialize the many Tibetan self-immolations that have occurred during the Tibetan struggle for freedom. The Taiwan Tati Cultural and Educational Foundation organized the building of the tower. The foundation is a civil society who's main goal is to advocate a democratic and independent state of Taiwan.

The tower is located in the Taiwan Holy Mountain Ecological Education Park, a place dedicated both to education and as a memorial to those who have sacrificed their lives for the sake of Taiwan's democracy, freedom and human rights. Democracy activists, Chairman Dawa Tsering of the Tibet Religious Foundation of His Holiness the Dalai Lama, monks and nuns were all invited to attend the ceremony.

The Tibetan Uprising Tower is about 5-6 meters high and is placed on a square base of marble symbolizing the great land of Tibet. The surface of the base is engraved with a memorial inscription and the Tibetan flag.Additionally, the names of the martyrs who have self-immolated since 2008 are inscribed in the Tibetan alphabet on the base of the tower. The main section of the tower is made from iron artifacts that came from a ruined temple during the Cultural Revolution in China. On the top, a small stone ball is stacked upon a larger ball, meant to symbolize perfection.

During the ceremony, both the Tibetan National Anthem and a famous Taiwanese folk song were sung, and three Tibetan gurus prayed sutra in front of the tower. The main organizer, Mr Hsu-tung Yang, chairman of the Taiwan Tati Cultural and Educational Foundation, opened the ceremony, expressing that Taiwanese and Tibetans are on the same team in the fight for democracy and independence, and in the resistance of China's violence.

Mr Zai-ting Tian, chairman of Formosa TV (the highest-rated TV station in Taiwan), which broadcasted the day's ceremony, then praised those Tibetans who sacrificed their lives, calling them democratic heroes in our global village. 98 year old Mr Su Beng, a spiritual leader of Taiwanese independence, urged that the Taiwanese and Tibetans must maintain their faith in the fight for independence.

Mr Dawa Tsering expressed his gratitude to the Taiwanese for the tower, which he asserted was sure to commemorate the suffering of Tibetans. The Taiwanese also shared their hope that His Holiness the Dalai Lama can soon freely visit Taiwan and witness the tower himself.

Rainbow Liao, a Tati volunteer and also a practitioner of Tibetan Buddhism, said that "Recollecting Cheng Nan-jung setting himself on fire in insisting on the freedom of speech, and shouts proudly that 'I am Taiwanese, I advocate Taiwan independence'" and at the same time, we shall not forget in a distant away that a group of people live in a snow-land and have the same values as we do in pursing democracy and freedom, and now they are struggling bravely for their religious freedom and Tibet independence."

Taiwan and Tibet both face oppression and infiltration at the hands of the Chinese Communist regime. The Tibetan Uprising Tower was built as a link between the island and the plateau who possess the shared values of freedom and democracy. With the completion of the tower, it should serve as a constant reminder to the people of Taiwan that freedom is truly precious, and as a tribute to the souls of the martyrs who continued the struggle for democracy.