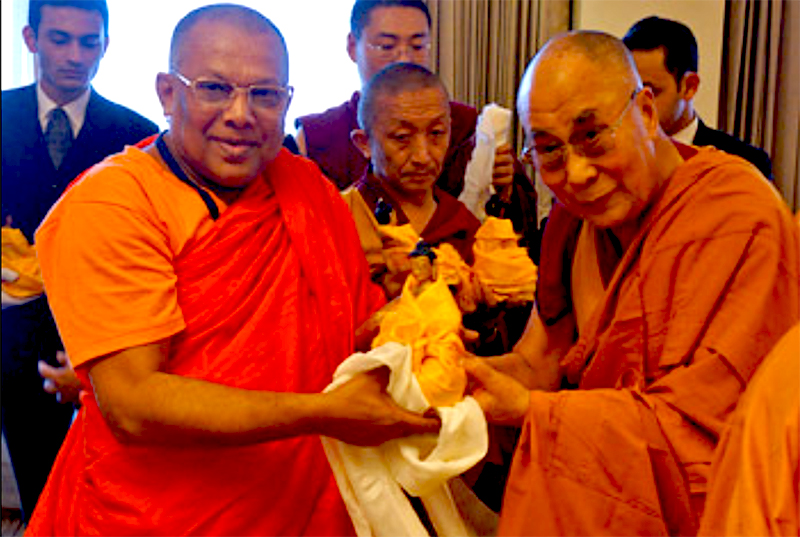 New Delhi, India, 19 March 2015 - Thursday morning the spiritual leader of Tibet His Holiness the Dalai Lama met with a delegation of Sri Lankan Theros, senior monks, for discussions that would include Vinaya or monastic discipline. Having warmly welcomed them, he declared: "We are all followers of the same Buddha.

At a time when scientific minded people are expressing some doubts about religion, many of them are expressing an interest in aspects of the Buddha's teachings," His Holiness said.

The Sri Lankan monks gathered represented the three principal traditions of Sri Lankan Buddhism: the Ramanya, Shiyam and Amarapura Nikayas, in addition to members of the Asgiri Chapter and the President of the Mahabodhi Society.

"Yesterday we discussed the Vinaya all day. We compared the Theravada and Mulasarvastivada traditions, which are the Vinaya traditions of Sri Lanka and Tibet respectively, and found no significant differences between them," the spokesman of the group said.

The monks expressed a unanimous wish, shared by a large number of people in Sri Lanka, to see His Holiness visit their country. He replied that not only would he be very happy to come, but he would be happy if Sri Lankan monks were to come to visit and exchange views with Tibetan monks.

The Nobel Peace laureate remarked that while his health in general is good, he has trouble with his knees that hinder his going up and down stairs and expressed a willingness to speak from a wheelchair if necessary. With regard to his travels abroad he said:

"I never try to propagate Buddhism in non-Buddhist countries, partly out of my respect for other religious traditions and partly out of a desire to foster inter-religious harmony. As 21st century Buddhists, what we all need is to know is what ethics, concentration and wisdom are. We need to understand how the Buddhist teaching of selflessness corresponds to the views of Quantum Physics."

His Holiness expressed his wish to find ways to educate ordinary people about the reality that the ultimate source of happiness is within us, that inner values are a source of peace of mind. He went on to extol the fundamental wisdom of the Four Noble Truths and how the Sanskrit tradition explains their 16 characteristics.

The eldest of the Sri Lankan Theros expressed his approval of this exchange of views and suggested that the quality of the monastic community would be improved if the bimonthly confession and purification rituals were more strictly observed.

When His Holiness asked what particular text the Sri Lankans rely on to develop wisdom they mentioned Buddhaghosha's 'Visuddhimarga' or 'Path of Purification'. He remarked:

"We are spiritual brothers following Shakyamuni Buddha, but you are the senior students. I often mention that the Chinese are senior to us in their study of the Buddha's teachings too. However, Tibetans make up for their junior status by the depth of their study and understanding. I am convinced we can learn from each other, and this has been a good beginning."